Korean figure skater Lee Hae-in found herself in last place after the first day of her final competition of the year. 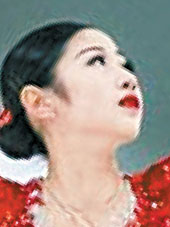 That’s the lowest short program score for the 14-year-old Lee, who had earlier won two ISU Junior Grand Prix events in September to qualify for the Grand Prix Final.

The free skate is Friday.

Alysa Liu of the United States won the short program with 71.19 points, followed by Daria Usacheva of Russia with 70.15. Another Russian, Kseniia Sinitsyna, had 69.40.

There are four Russians in the ladies’ singles, plus Lee and Liu. Russian skaters swept the podium at each of the last two Junior Grand Prix Finals.

Lee is attempting to become the first Korean woman to win a Junior Grand Prix Final medal since Kim Yu-na won gold in 2005.

Lee had a shaky start to her short program, as she was judged to have under-rotated on her opening jumps, the triple lutz-triple toe loop combination.

She was docked 0.42 points in grade of execution (GOE) on the element that had the highest base score.

Lee regrouped and had a clean program the rest of the way, and she scored an additional 1.12 points in GOE with her triple loop, part of the “highlight distribution” for jumps executed in the second half of her program.