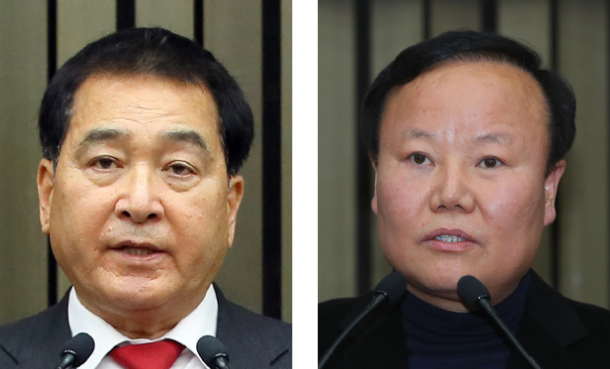 The LKP’s lawmakers held a vote Monday morning, and the Shim-Kim duo was elected in a runoff. Of the party’s 108 lawmakers, 106 participated, and the duo obtained 52 votes.

Both Shim and Kim vowed to fight to stop the ruling Democratic Party (DP) from passing a series of contentious bills.

“Starting this afternoon, the ruling party and other opposition parties will begin a negotiation to vote on bills to establish a new investigative agency, revise the election law and pass next year’s government budget,” Shim said after his victory was confirmed. “I will visit the National Assembly speaker and my ruling party counterpart and demand they stop their plan to pass the budget bill today. I will tell them that passing the bills among the ruling party and four opposition parties is unacceptable and we need to talk about the bills again.

“We all know what the ruling party had done until now,” Kim said. “We will start negotiations all over again starting today.”

Shim led protests against the Chun Doo Hwan regime as the president of the student council of Seoul National University. Before becoming a politician, he was a journalist at MBC.

Shim has been a strong critic of the Moon administration and the DP. During the 2017 presidential election, Shim raised the suspicion that Moon’s son received special treatment when he was hired by the Korea Employment Information Service.

In September, Shim shaved his head when Chairman Hwang did so to protest Moon’s decision to name Cho Kuk as justice minister.

Shim recently raised an allegation that special treatment was given when loans were granted by the Korea Development Bank to the Wooridul Hospital, operated by an associate of Moon and the ruling party.

Kim is a core member of the pro-Park faction. He served as senior presidential secretary for political affairs in the Park Blue House in 2016. He is known to be a close ally of LKP Chairman Hwang. He is currently serving as chairman of the National Assembly’s special committee on budget and accounts, and is one of the key strategists of the LKP. A native of Uiseong, North Gyeongsang, Kim was a prosecutor before winning his first seat in the assembly in 2004.