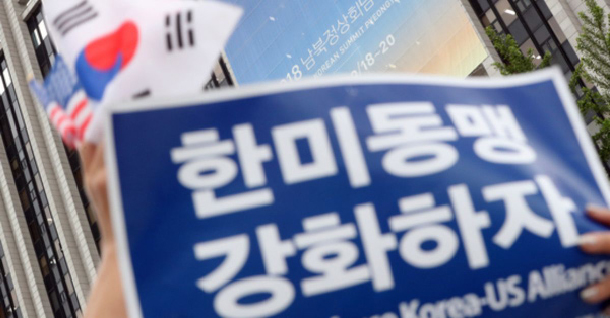 A conservative group holds up a picket that reads “Strengthen the Korea-U.S. alliance!” in a rally on Sept. 20, 2018, to oppose the inter-Korean summit in Pyongyang. [NEWS1]

The Ronald Reagan Presidential Foundation released an annual survey on Nov. 26. It contains the gloomy reality of the Korea-U.S.
alliance in 2019. The number of average Americans that consider South Korea as a strong ally drastically dropped compared to last year.
In last year’s survey, 77 percent of the respondents said they consider South Korea as an ally — 45 percent responded “a strong ally” and 32 percent “something of an ally.” Korea was ranked the fifth strongest ally after Britain with 67 percent, Israel with 49 percent, Japan with 48 percent and France with 46 percent.

However, in this year’s survey, 37 percent perceived Korea as a strong ally, down 8 percent from last year. Instead, 36 percent, up 4 percent from last year, responded that Korea was “something of an ally.” As a strong ally, Korea is on par with Germany in sixth place. After 70 years, it is clear that the blood tie from participating in the Korean War in 1950 is fading.

In this year’s new section on isolationism and intervention, 50 percent responded that the United States should intervene and take more initiative in international affairs. Thirty-three percent wanted less intervention and more post-response while 11 percent said it depends on the case. Five percent said they do not know. The fact that less than half said the United States should lead international issues reflects the reality that U.S. President Trump’s “America First” has substantially spread among average Americans.

Eighty-six percent said that the United States should use military strength to remove potential threats before attacks. Also, 84 percent said that if North Korea were suspected to conduct an attack on the United States, Korea or Japan, military strength should be used to prevent the attack by cooperating with allies. If the survey is accurate, average Americans’ sense of the alliance with South Korea has been weakened, but they have more support for pre-emptive military actions against North Korea.

At a defense forum hosted by the Reagan Foundation, former Defense Secretary James Mattis said that he did not like openly insulting U.S. allies when he was in office. So he urged Washington to refrain from insulting allies that are on America’s side in international issues. He was making a roundabout criticism of President Trump who uses harsh language to put pressure on increasing the defense cost-sharing deal in the Special Measures Agreement. The beginning and end of cost sharing negotiations should be reinforced joint readiness. I am worried if there is a genuine manager of good alliance remaining in Washington and Seoul after Mattis’ departure.