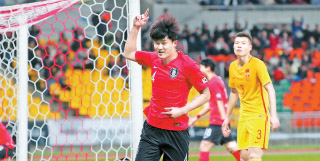 Korea, the world No. 41, opened the tournament with a 2-0 win over Hong Kong last Wednesday and will wrap things up against the 28th-ranked Japan on Wednesday, back at Busan Asiad. Japan also defeated China and Hong Kong in their first two matches, and the winner of the showdown between the long-time rivals on Wednesday will be declared the champions.

Korea is chasing their third consecutive title and fifth overall, while Japan will look to win their first since 2013 and third overall. No country has won three EAFF titles in a row since the competition began in 2003.

Kim Min-jae put Korea on the board with a 13th-minute header off a Ju Se-jong corner. Kim, who plays his club football for Beijing Sinobo Guoan FC in the Chinese Super League, has scored two of his three international goals against China.

Korea kept knocking on the Chinese team’s door for an insurance goal that never came.

In the 22nd, Lee Yeong-jae’s left-foot strike just went over the crossbar. Nine minutes later, Na Sang-ho redirected a Kim Min-jae cross with his chest, but the ball bounced wide of the right post.

Three minutes into the second half, Yun Il-lok sprung Na Sang-ho on a breakaway, but the wing attacker hit the left side of the net with his shot.

And in the 58th, Lee Yeong-jae found himself wide open after receiving a pretty pass from Lee Jeong-hyeop from the right side, but ended up airmailing the shot well over the net.

Head coach Paulo Bento made three substitutions on offense, but none paid off.

On the defensive end, Korea held their 75th-ranked opponents without a shot on goal, and improved to 20-13-2 (wins-draws-losses) against China.

Korea entered Sunday’s match down two players: forward Kim Seung-dae was ruled out with a broken rib and fullback Kim Moon-hwan has been sidelined with a left quad injury. Both will miss the rest of the tournament but will not be replaced.

Bento is also without the services of Europe-based players, such as Tottenham Hotspur attacking ace Son Heung-min and budding FC Red Bull Salzburg star Hwang Hee-chan. This EAFF tournament isn’t on the FIFA international match calendar, and clubs aren’t obliged to release their Korean players for this event.

All but one player are based in Korea, China and Japan, the lone exception being Vancouver Whitecaps midfielder Hwang In-beom.

At the women’s tournament, the Taeguk Ladies defeated Chinese Taipei 3-0 at home on Sunday, handing their new coach Colin Bell his first victory.

Midfielder Jung Seol-bin rounded out the scoring with her 88th-minute header.

This was Korea’s first victory since a 2-0 win over New Zealand in a friendly tournament in Australia on March 6. The team had posted three draws and six losses until Sunday’s breakthrough.

Korea had opened this four-nation tournament with a 0-0 draw against China last Tuesday, which was also Bell’s Korea coaching debut. The team’s final match will be against Japan on Tuesday.

The winner of that contest will take the title. Korea is trying to win their first E-1 championship since the inaugural event in 2005.

Japan, the highest-ranked team in the tournament at No. 10, earlier defeated Chinese Taipei 9-0 and then China 3-0. They’re going for their first EAFF title since 2010.

Korea, world No. 20, entered Sunday’s match against the 40th-ranked Chinese Taipei as the heavy favorites, having won the past 12 straight meetings.

Perhaps in a sign of his confidence against Sunday’s opponents, Bell changed his entire starting lineup from the opening match, with goalkeeper Jeon Ha-neul and teenage forward Choo Hyo-joo making their international debuts on Sunday. Defenders Eo Hee-jin (four caps prior to Sunday) and Park Se-ra (seven caps), and Kang (seven caps) were also part of the inexperienced group.

Korea dominated the possession from the beginning and broke the deadlock with Kang’s first goal of the match in the 29th minute. After Jeon Eun-ha’s shot was turned aside by goalkeeper Cheng Ssu-Yu, Kang pounced on the rebound and put it into the bottom right-hand corner.

Kang doubled Korea’s lead in the 70th, this time firing one past Cheng from the right side of the box after taking a feed from Kwon Eun-som.

Then Jung put the finishing touch on a breezy victory in the 88th, when she headed home a Lee So-dam corner for her 22nd international goal, more than any Korean player on the current team.