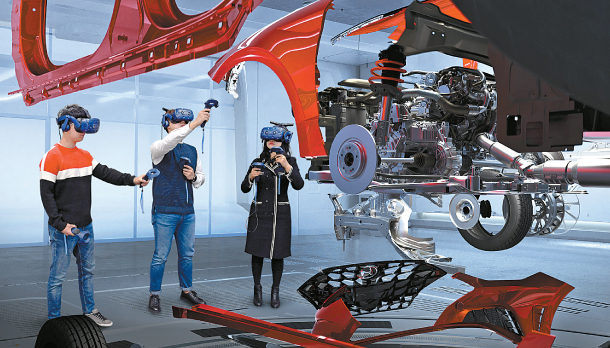 Hyundai Motor Group employees use the virtual reality assessment system that the automaker is applying at its Namyang R&D Center in Hwaseong, Gyeonggi. [HYUNDAI MOTOR GROUP]

HWASEONG, Gyeonggi - Vehicle development, which has traditionally involved clay models and the running and crashing of prototypes over and over again for months on end, is fast changing at Hyundai Motor Group.

At its Namyang R&D Center in Hwaseong, Gyeonggi, the Korean automaker has been utilizing virtual reality (VR) technology in designing and testing its future models after investing 15 billion won ($12.9 million) in March this year to build world’s largest VR design assessment center inside the research and development (R&D) facility.

Hyundai Motor Group in July changed the organization structure for the R&D center to be architecture-centered and more capable of using the VR system.

With the new system, 20 high-ranking company executives can meet at the R&D center and just wear VR goggles to evaluate the proposed designs of new cars, watch how they run in test environments and even get behind their virtual wheels.

According to the company on Tuesday, the newest enhancements to Hyundai Motor Group’s car design and testing processes can shorten its new vehicle development timeline by 20 percent while cutting related costs by 15 percent.

The company is certain that going for VR technology was absolutely necessary, as the cost cuts and more efficient R&D process can help it be more responsive to the changing needs of the global automobile market and consumers.

Hyundai Motor Group said the system used for the initial stage of vehicle development could reduce errors and allow the automaker to test its latest technologies more efficiently.

“In today’s new world, it’s no longer bigger fish preying on smaller ones; rather, it’s more of faster ones catching the slower ones,” said Yang Hee-won, director of vehicle structure design at Hyundai Motor Group, during a media event at the R&D center Tuesday. “In today’s changing paradigm, automakers are required to quickly respond to complex customer demands, so Hyundai Motor Group is strengthening the virtual development system.”

Unlike in the past, when Hyundai Motor had to spend money to purchase its competitor vehicles to analyze and make comparisons, the automaker says it can now just sync the data of competitor models and compare them with its own in the virtual space.

Inside the virtual space, designers can choose car parts, assemble, change colors and make changes, while researchers can throw the assembled test models into various driving environments to evaluate the performance, safety and convenience features.

The company said the system was first used in the design assessment stage for the HDC-6 Neptune Concept heavy-duty truck, introduced in October this year. From now on, all new cars from Hyundai Motor and Kia Motors will undergo the virtual assessment and evaluation process.

To ensure it can produce cars that meet global tastes, Hyundai Motor said it is working on creating a remote-accessible VR design assessment platform where its designers in Europe, the United States, China and India can gather to take a look and evaluate proposed designs.

The automaker added that it is also looking to apply augmented reality in the VR system that will allow the company to better test its autonomous driving technology, one of the key focuses for Hyundai Motor as it looks to stay competitive.