Meetings in Beijing don’t pan out for Biegun

Meetings in Beijing don’t pan out for Biegun 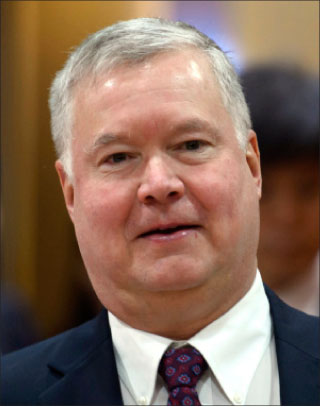 Stephen Biegun, the U.S. special representative for North Korea, apparently failed to meet with North Korean officials during his visit to Beijing Friday and was expected to depart for home yesterday night.

Biegun touched down in Beijing Thursday for a two-day trip, and there was speculation he may meet North Korean officials there amid stalled denuclearization talks between Washington and Pyongyang. But Yonhap reported that Biegun appeared not to have met anyone from the North.

Neither Beijing nor Washington made any official announcement on Biegun’s Chinese visit as of 8 p.m. press time Friday, but Biegun is known to have stressed to Chinese officials that it was crucial to keep maximum pressure on the Pyongyang regime and asked for help in bringing the North back to the dialogue table.

While Biegun was visiting China, the U.S. Senate voted overwhelmingly to confirm him as deputy secretary of state on Thursday, and with that, he became the second-highest individual in the State Department after Secretary of State Mike Pompeo.

When Biegun was nominated for the role, the department said he would keep his North Korea portfolio.

Biegun’s trip to Beijing was widely seen as his last opportunity to make face-to-face contact with North Korean officials before Pyongyang’s self-imposed year-end deadline for Washington to come up with a different approach to denuclearization talks.

Biegun’s Beijing trip was the last of a three-leg tour that included stops in Seoul and Tokyo. During a press conference in Seoul Monday, he said to North Korea, “We are here, and you know how to reach us,” while stressing that the United States “does not have a deadline” on denuclearization talks.

The North eventually did not reach out.

In reaction to Pyongyang’s threat to give a “Christmas gift” to Washington soon, which some analysts guessed would be the launch of a long-range missile, Biegun noted that Christmas Day was “one of the most sacred holy days on our calendar,” adding, “It is our fervent prayer and hope that this day will usher in a season of peace.”

Leif-Eric Easley, associate professor of international studies at Ewha Womans University in Seoul, downplayed any chance of a major test happening in the remainder of this year.

“North Korea would anger China by conducting a major test while [Japanese Prime Minister Shinzo] Abe and [South Korean President] Moon [Jae-in] are in Chengdu for a trilateral summit,” he said.

Moon is scheduled to hold a bilateral summit with Chinese President Xi Jinping in Beijing Monday and then travel to the southwestern Chinese city of Chengdu to attend a trilateral summit with Chinese Premier Li Keqiang and Abe on Tuesday. “Pyongyang can instead seek headlines with a high-level Workers’ Party meeting ahead of [North Korean leader] Kim [Jong-un]’s New Year announcements. So we can expect more rhetoric and preparation before a major launch,” said Easley.

Easley predicted the North will eventually carry out a test at “some point” down the road to demonstrate and develop its military capabilities, but noted that technically challenging tests can fail, which is why the regime would not want to risk a failed test before Kim’s New Year speech.