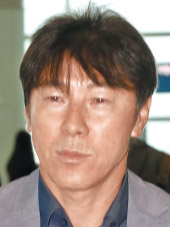 Shin wasn’t able to fulfill Korea’s goal of advancing to the knockout stage of the 2018 FIFA World Cup in Russia in August last year but was still hailed for his achievement of leading the team to an upsetting 2-0 victory against the 2014 FIFA World Cup champion, Germany.

There were reports that Shin was offered higher paying coaching jobs in the Japanese and Chinese leagues, but in the end, Shin decided on Indonesia.

“I received a great offer from Shenzhen FC [in China] so I really thought about it,” Shin said. “Since Shenzhen’s head coach [Roberto Donadoni] hasn’t resigned yet, I thought it was disrespectful to continue my negotiation. So I turned down the offer and chose Indonesia.”

Shin has agreed to a three-year contract with Indonesia and is expected to coach a variety of age ranges including the senior, U-20 and U-23 teams. Just like Park’s Vietnamese football team, Indonesia also hopes to see structural progress and change under Shin.

Currently, the Football Association of Indonesia is heavily focusing on their U-20 team. As the U-20 FIFA World Cup is scheduled to be hosted in Indonesia in May 2021, their aim is to up the team’s competitiveness.

Shin said the Football Association of Indonesia showed great interest in him based on his career at the Rio Olympics, where he led the Korean squad to the quarterfinals; at the 2017 U-20 FIFA World Cup, where his team reached the round of 16; and at the FIFA World Cup in Russia, where the team won against Germany.

With Shin’s appointment and Park’s career in Vietnam, football in Southeast Asia is expected to gain popularity among Korean football fans. The two coaches are already scheduled to face each other on June 4, 2020 as Vietnam and Indonesia are assigned in Group G at the second round of the Asia qualifier for the 2022 Qatar World Cup.

Currently, Vietnam is the leader in the group with three wins and two draws, while Indonesia is ranked last with no wins and five losses.

“I was given this great opportunity because head coach Park Hang-seo had great success in Southeast Asia,” Shin said. “For the Korean coaches who may be continuing their careers in Southeast Asia in the future, I want to be successful. I also don’t want to lose in a match against Park.”