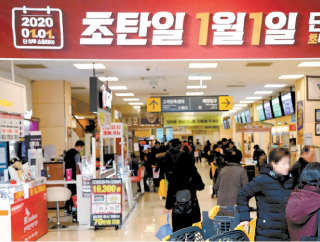 Retailers are wasting no time firing the first shots in their ongoing war, rolling out deep discounts on the first day of the year.

Emart is selling a 49-inch ultrahigh-definition (UHD) television for 299,000 won ($268), while rival Lotte Mart is selling whole fried chickens for 2,500 won. Homeplus is offering a 20 percent discount on wine.

Today, Emart is offering a 20 percent discount on the 49-inch UHD television to those who purchase the household appliance with a debit or credit card from designated card companies, including Samsung and Shinhan. Cuckoo’s induction heating rice cooker, which makes 10 cups of rice, is going for 168,000 won. An air fryer is offered at 59,800 won.

“Through the funds secured from reorganizing special stores, Emart plans to aggressively invest in renewing offline stores and securing price competitiveness through promotional events,” said a spokesperson for Emart.

The retailer said the number of customers on its promotion day on Nov. 2 increased 38 percent, while its on-year sales jumped 71 percent.

Fresh produce, meat and snacks, like Choco Pies and Xylitol gum, are also being sold at lower prices.

The retailer will offer two chickens at 5,000 won, if customers pay using a card from companies like Lotte and Hyundai.

Fruits like tangerines and strawberries are also being offered at discounted prices.

“Starting with the event, we plan to build an image of being a discount chain franchise with price competitiveness in 2020,” said a spokesperson for Lotte Mart. The retailer believes holding such events at offline stores will help divert online consumers to physical marts.

Homeplus is jumping on the bandwagon.

Today, it is offering discounts on 300 daily necessities, largely centering on food.

The retailer is selling 100 grams of premium pork belly at 990 won, and eggs are going for 100 won each. Seasonal fruit, like hallabong (citrus fruit) and pomegranate, as well as popular processed foods, like instant noodles, dumplings and soft drinks, are also offered at lower prices than usual.

Homeplus plans to extend the promotion on certain products over the next four weeks. Roasted almonds, glutinous rice and electric shavers are some of such items.

The retailer explained it decided to jump into the price battle due to the weak performance of retail chains.

“The event was organized to help consumers obtain high-quality products at affordable prices on the first day of a new year,” said a spokesperson for Homeplus. “We will contribute to stabilizing prices by offering cost-effective products from a range of categories.”

For the first time since its establishment, Emart posted an operating loss in the second quarter. Emart and its affiliate, which include SSG.com and Traders, posted 29.9 billion won in operating losses, while Lotte Mart, in the same period, posted a 34-billion-won operating loss.