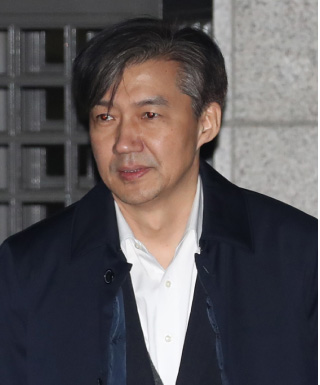 Former Justice Minister Cho Kuk was indicted Tuesday on 12 different charges including bribery and graft, nearly four months after prosecutors kicked off a massive probe into his family’s finances and other possible corruption.

Prosecutors, in essence, believe Cho colluded with his wife, Chung Kyung-sim, an English professor at Dongyang University in Yeongju, North Gyeongsang, to unlawfully help their daughter get into Pusan National University’s medical school, and broke the law on numerous occasions to amass wealth.

Cho’s allegations mostly overlapped with Chung’s, who on Nov. 11 was indicted on 14 charges on top of a first charge filed on Sept. 6. Chung is currently detained and awaiting trial on 15 charges while on unpaid sick leave from her university.

Immediately after Cho resigned as justice minister in early October, after only 35 days in the job, he returned to his old job teaching at Seoul National University’s law school, though he hasn’t actually started any courses.

After prosecutors announced Cho’s indictment Tuesday, Seoul National University said it would “review” relieving him of his duties as a professor. That would mean Cho wouldn’t be kicked out of the school, but would not be allowed to teach students either.

A spokesperson for the school stressed that the measure was not punitive.

The Blue House swiftly responded to Cho’s indictment by hammering prosecutors for concluding Cho’s probe with “extremely narrow” results despite causing such a huge ruckus about the investigation.

Cho was one of President Moon Jae-in’s closest aides in the presidential office, where he served as Moon’s senior secretary for civil affairs for two years from May 2017.

Yoon Do-han, Moon’s senior secretary for public communication, said in a statement Tuesday afternoon that the results of the prosecution’s probe induced the Blue House to “doubt the very purpose” of the investigation.

“The public’s trust in the prosecution will apparently be affected as well. It’s sad for a national institution to lose public trust,” Yoon said.

Yoon urged prosecutors to refrain from playing to the media until the court hands down a verdict in Cho’s case.

The Cho probe was effectively wrapped up with Cho and Chung’s indictments, but prosecutors said Tuesday they would continue investigating other suspects, leaving open the possibility that the couple’s daughter and son could face indictment too.

Prosecutors believe that the scholarships Cho’s daughter received from Pusan National University’s medical school from November 2017 to October 2018 - despite flunking two semesters - were bribes offered by the daughter’s professor to Cho.

At the time, Cho was the presidential senior secretary for civil affairs, and the professor, Roh Hwan-jung, was director of the Pusan National University Yangsan Hospital. Prosecutors think Roh pulled the strings to allow the daughter to receive 6 million won ($5,200) in scholarships so that Cho, in turn, could pull strings to help Roh get promoted.

Cho was also accused of taking two online tests for his son at George Washington and helping him earn an A in the subject.