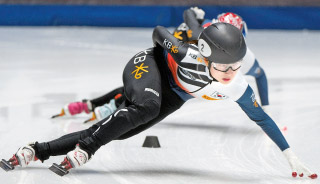 Choi Min-jeong made headlines at the unisex tournament after taking all the golds on offer at the event. She began her winning streak by taking first place in the women’s 1,500-meter race, clocking 2 minutes and 41.270 seconds. Choi surpassed her teammate Seo Whi-min by a close 0.097 seconds to pick up her first gold of the season.

By amassing a total of 136 points, Choi won the women’s overall classification to pick up gold in all five women’s events, while Seo finished second overall.

Choi first garnered attention as a short track skater by winning gold in the women’s 1,500-meter and 3,000-meter relay at the PyeongChang Olympics. She then went on to win overall classification at the world championship last year. However, in the 2019-20 season, injuries put an end to her hot streak. In the first four World Cup series, Choi failed to win gold in any of the individual races.

However, her incredible performance at the ISU Four Continents Short Track Championship will undoubtedly serve as a serious confidence booster. She showed her satisfaction with her performance after the tournament by saying that she feels that she’s recovered to about 70 percent of tournament mode.

“My goal was to get first place overall here,” Choi was quoted as saying on the ISU website. “So I’m happy. I always give it everything, and now I know a few things I still need to improve on before Seoul [for the ISU World Championships in March].”

In the men’s competition, countryman Hwang Dae-heon also took the overall gold and picked up gold in the men’s 500-meter, 1,000-meter and the 1,500-meter events. As he already secured his win in overall classification, Hwang helped his teammate Park Ji-won claim victory in the 3,000-meter superfinal and finished in seventh place himself.

In the overall classification, Hwang earned a total of 103 points, well ahead of Steven Dubois of Canada, who finished second with 65 points. Park finished third overall by earning 47 points.

With victories in both men and women’s relay races, Korea managed to take home all 10 gold available at the tournament.

The championship was the inaugural edition of the event in which only non-European countries compete, so notable skaters like Suzanne Schulting of the Netherlands and Martina Valcepina of Italy did not participate.

Canada and China were also missing some of their top-skaters.