Lions’ young pitcher has big plans for his pride

Lions’ young pitcher has big plans for his pride 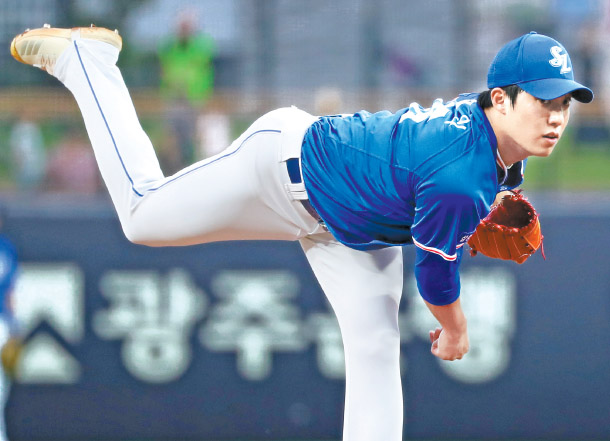 Samsung Lions pitcher Won Tae-in throws a pitch during a game against the Kia Tigers at Gwangju-Kia Champions Field in Gwangju on Aug. 28. [YONHAP]

Won Tae-in, the young starting pitcher, proved to be a ray of light in an otherwise dismal season for the Samsung Lions.

Having joined the Lions in 2019, Won made his KBO debut with the club as a bullpen pitcher. After exceeding expectations, he was finally given an opportunity to prove himself in April. Due to pitcher Choi Chae-heung’s absence, Won was given a temporary starting position in a game against the LG Twins.

His impressive performance even put him in the running as a potential candidate to win the KBO’s Rookie of the Year award.

But it hasn’t been all positive for the 19-year-old. He broke his stride in the second half of the season. In August, Won started in four games, where he picked up losses in three and recorded a 14.88 ERA for the month. Although he made somewhat of an improvement in September, it wasn’t as good as the first half of the season, as he finished with a 4.09 ERA in two games.

Despite tossing 112 innings in his rookie season, his struggle in the second half of the season impacted his chances for the Rookie of the Year race, and he ended up finishing fifth.

Won will have to set his disappointment aside for the upcoming season where he will be playing under new manager Heo Sam-young.

Below are edited excerpts from an Ilgan Sports interview with Won.

Q. How do you feel about your rookie season?

A. I think I learned a lot. I didn’t play well in the second half of the season, but through that, I learned which areas I have to work in to be better this year.

What did you learn?

To spend one full season as a starting pitcher, I learned that physical strength is very important. Actually, a lot of people around me have said that rookies tend to fall behind in the second half of the season, but I didn’t really get that. But once I actually experienced it, I felt like I learned a lot. I’m training and focusing on that.

Do you think the main problem behind your struggle in August was a lack of energy?

Despite being a rookie, you managed to pitch in 112 innings throughout the season. How do you feel?

I tossed more innings than I thought. At first, I told myself to stay in the bullpen consistently, but I got a great chance, unexpectedly. As I tried to get the most out of that opportunity, I think I just got to pitch a lot of innings. It was a great experience, and I wouldn’t swap it for anything.

Were you disappointed about any of your overall statistics for your 2019 season?

Looking at the games you’ve started in, you didn’t get much run support. Do you have any regrets regarding that?

In that area, I don’t have any regrets. In the beginning of the season, when I was on a stride, rather than the disappointments of not getting the run support, I was satisfied about the fact that I was fulfilling my role. At the time, everything worked out well, and I had some quality starts. Even if I didn’t pick up a win, I was happy when our team won.

Throughout your rookie season, your pitches weren’t as fast as back when you were in high school. What happened?

It is true that I lost the speed of my pitches in general. I was a little careless in the beginning of the season. I just thought that the speed would increase eventually. But in the second half, when I started to lose energy, the speed of my pitches dropped more. This winter, I consider physical strength and increasing the speed of my pitches as the most important factors. When I was at my best in high school, I weighed in the high-80 kilograms but last season, I weight about 91 to 92 kilograms (200 to 202 pounds). Rather than losing weight immediately, I came up with a longer plan, where I’m going to maintain my weight at 90 kilograms and adjust it during spring training. Then, I hope to play the season with a lighter body.

You’ve been tossing a lot more change-ups. Is there a specific reason for that?

If I didn’t have my change-up, then I probably wouldn’t have stayed with the Lions for that long. I’m very confident with that pitch, but since I was only thinking about that, it affected the speed of my fastball. Before, I prioritized change-up more than fastball, which I was more confident in. At the spring training, [catcher Kang] Min-ho suggested I practice pitching faster pitches like fastballs and cut fastball, rather than breaking balls like change-ups. I’m thinking I will pitch against the batters with faster pitches.

What do you think is the main factor for you to get back to the form you were in in high school?

Speeding up my pitches will be the priority. I felt that my breaking ball works only when they are fast.

What will you focus on during spring training?

When I tossed over 70 pitches, I felt that I started to lose energy. I could make excuses last year because I prepared for the season as a bullpen, but it’s different this time. My first goal is to have my body ready to toss six to seven innings, like starting pitchers.

When you look back at your 2019 season, how would you evaluate yourself?

Since I tossed more than 100 innings, I can give myself a score of 50 [out of 100]. I think I received that full 50 during the first half of the season, and in the second half, I want to give myself a score of 0. Since I fell behind in the second half of the season, I fell behind in the Rookie of the Year race. But the Rookie of the Year award isn’t everything [in my career]. I’ll use it as a stepping stone and become a pitcher that can earn a higher score.

You probably have a lot of weight on your shoulders ahead of the 2020 season. How do you feel?

I don’t think I have a firm spot [on the team] yet. At spring camp, I heard from our coach that I will have to compete for the starting spot. I think I have to start camp with a competitive mindset. I feel more motivated as well as responsible. Since it was my spot, I don’t want to lose it. Instead, I want to keep it.

If you were to play the season as a starter, what would be your goal be?

Last year, I think I had less than 10 quality starts. I hope this year can be the season where I can have more [quality starts]. Due to an injury toward the end of the season, I couldn’t play one full season but I want to become a pitcher who can play full time, fulfilling the regulated number of innings, without any injuries.