Lee Seung-woo’s re-evaluation of his expectations

Lee Seung-woo’s re-evaluation of his expectations 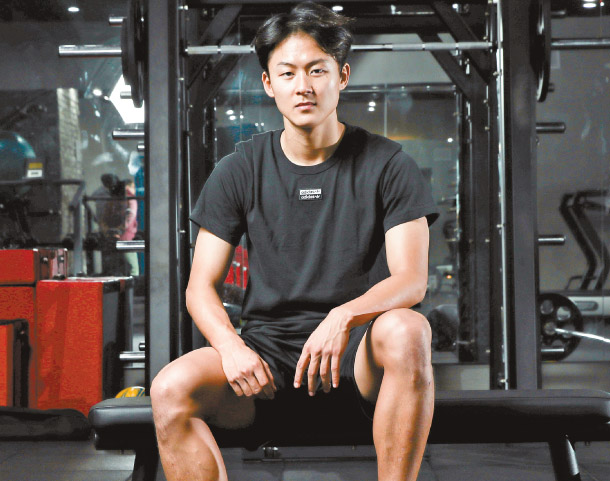 Having finally made his Belgian league debut on Dec. 26, last year, Lee Seung-woo of Sint-Truidense hopes to gain experience on the pitch by playing in more matches in 2020. [WOO SANG-JO]

When Lee Seung-woo joined Sint-Truidense on Aug. 30, 2019, his expectations were high that he was set for a lot more playing time, but it was almost four months before he even got to debut.

“I was waiting [to get substituted] at the touch line, but I got emotional because I started thinking about my mom,” Lee said. “She came to Belgium, an unfamiliar country, and travelled with me to away games and supported me. So I told myself when I stepped on the ground that I’ll never give my family a hard time because of [not being able to play].”

On Dec. 26, Lee finally made his Belgian league debut against Waasland-Beveren. He was substituted into the games in the 72nd minute and played for about 20 minutes. Despite the short playing time, he was thankful for the opportunity.

“I’ve never imagined this,” Lee said. “I got a lot of support and love from the fans in Verona [in Italy] but as they appointed a new manager or two every season, our strategies changed. Due to this, I was suffocating for having to compete for the starting spot.”

Due to this, Lee decided to join a different club in order to get more playing time and more experience. During the summer transfer season last year, Lee was approached with quite a number of offers, but of all, Sint-Truidense was the most proactive about signing Lee.

“I got a call from the owner of the club, and he said he’ll let me play as much as I want,” Lee said. “He also said that he’s fine with me transferring to a big club in the winter, but until then, he told me to play at my full potential. Since that’s what the owner of the club said, I trusted in it 100 percent.”

Sint-Truidense went even further in its bid for Lee with its contract terms. He was offered the club’s highest annual salary of 800,000 euros ($888,000), also the highest of any player in the club at the time, and was given the club’s second-highest transfer fee of 1.2 million euros. In addition to the financial part of the contract, he was also offer the number 10 jersey, normally reserved for the club’s ace player.

But in spite of the alluring contract, Lee remained on the sidelines. His four-month-long absence from the pitch under manager Marc Brys still remains as mystery. Whenever Brys was asked about it, he kept repeating that Lee needed more time to adjust.

When Brys stepped down in November, last year, Lee’s time on the bench also seemed likely to come to an end. Caretaker Nicky Hayen stepped down from his position and is now a coach.

“I’ve asked the manager [about needing more time to adjust] a number of times, but I didn’t hear a definite response,” Lee said. “Every time I asked, he changed the topic. I couldn’t continue the conversation. It felt like he was just avoiding a face-to-face talk.”

Having played in Spain and Italy, Lee said his career has been all about competing for that starting spot against his teammates. He said the four-month sidelining meant he knew that he would be ready to prove himself whenever he got the opportunity to get on the pitch.

“When I was playing in Spain and Italy, I was competing to survive,” Lee said. “I am very well aware of how to prepare myself to get the opportunity. Although it took longer than expected for me to get on the pitch, I’ve never loosened up my nerves and kept preparing. So I’m proud of myself.”

In addition to not being able to play, some of the negative comments also hit Lee hard. When he took the high road and didn’t respond, his fans started to report the cyberbullies. When he finally made his debut with Sint-Truidense, the malicious comments began to disappear.

“I can handle criticism because it means a lot of people are showing interest in me, but it’s really difficult if they personally attack me or my family, using abusive vocabulary or incorrect information.”

Whenever Lee had a hard time, he always asked for advice from Lee Chung-yong of VfL Bochum and Ki Sung-yueng of Newcastle United, who also spent years in Europe.

“I talk to Sung-yueng and Chung-yong a lot. We go out for a meal sometimes, and I heard good stories from them,” Lee said. “Even if they are considered national heroes now, they went through tough times for not being able to play in matches and suffered from negative comments. Their advice meant a lot to me.”

When he returned to Korea, rather than taking a break, he’s only been focusing on training. Lee and his trainer have been paying particular attention to his instant accelerating force ability and his ability to recover his muscles.

“I’m training with a number of players from the national team, but Lee Seung-woo’s accelerating force and recovery is at a top-class level, like Hwang Hee-chan [of FC Red Bull Salzburg].”

On Jan. 4, Sint-Truidense appointed a new manager, Milos Kostic, meaning Lee is essentially back at square one.

“During the winter transfer period, there were clubs that asked me to join them immediately, but right now, I thought it was time to challenge myself, rather than to move,” Lee said. “Just like my original goal, my priority is to bring up my experience competing by playing in as many matches as possible. I want to wear the Taegeuk mark, which has been far away from me for a while, again. If I get a chance, I’m confident.”