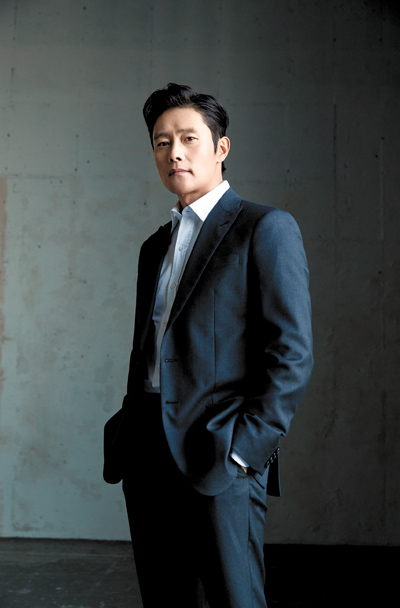 As a veteran actor with a wealth of experience, actor Lee Byung-hun has portrayed many famous historical figures. But he’s never before played a character based on a real person that has had such an impact on contemporary history, until his most recent role that is. Lee takes on the lead role of Kim Gyu-pyung in the noir “The Man Standing Next.”

Lee’s character Kim is modelled after the director of the Korean Central Intelligence Agency (KCIA) Kim Jae-gyu who worked during the Park Chung Hee regime and assassinated the president on Oct. 26, 1979.

Speculation and rumors about what drove Kim, known to be the second most powerful person in the country back then, to make such a radical choice remain hot topics to this day.

“That was what I had to do, convince people why Kim had to make the decision that he did through my character,” Lee said in an interview at a cafe located in Samcheong-dong, central Seoul. “[I did not] understand Kim’s actions and words 100 percent the first time I traced his history. But I think it’s the actor’s role to build up their characters to persuade the audiences, to make them understand the character.”

While Kim’s motive behind the assassination is still subject to debate, Lee and director Woo Min-ho unanimously agreed from the beginning of the film’s production that the plot should be told through a third person perspective, sticking to the facts instead of trying to pinpoint a specific reason why Kim did what he did.

“What remains a mystery to this day should still remain a mystery at the end of this film,” Lee said. “I hope that the audience leave their seats still curious about Kim’s motive - why did he do it? Was it planned or a spur-of-the-moment decision? Was it truly done for the greater good or was it personal?” 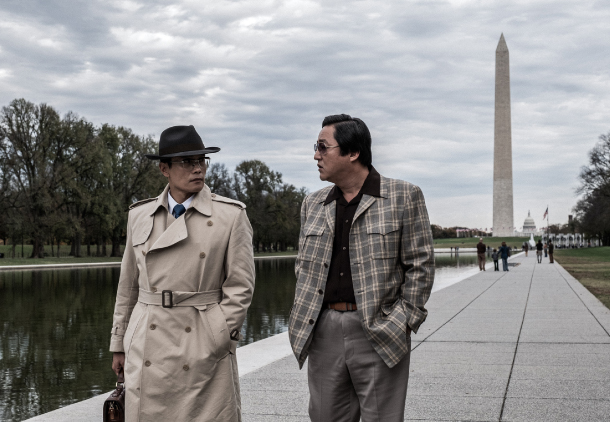 A scene from “The Man Standing Next” shows a meeting in Washington D.C. between Kim Gyu-pyung (played by Lee Byung-hun) and ex-director of the KCIA, Park Yong-gak (played by Kwak Do-won). [SHOWBOX]

Kim’s position as the head of the KCIA during the time not only signified his utmost devotion to President Park, but also symbolized that the president had placed his highest trust in Kim.

But Kim’s decades-long loyalty begins to waver as his beloved leader seems to neglect his advice, instead favoring the company of the president’s chief bodyguard, Kwak Sang-chun (played by Lee Hee-jun).

In the movie, Kim attempts to hide his anxiety, and his uneasiness is only shown through minute changes in his facial expressions or subtle movements.

“My character wasn’t one to express how he felt,” Lee said. “And considering the film’s personality, and especially its genre being a noir, it sets the movie in a dark mood, without that much dialogue. Such films like ‘A Bittersweet Life’ (2005) [that I featured in] tend to zoom tightly into my face [so that the audience is able to decipher my emotions easily].

“In extreme instances of close-ups, my face completely fills up the big screen and if I act the way I used to, people might be overwhelmed. So in such cases, I believe that if the actor just feels what they need to feel inside [instead of showing it], then that is enough to convey their emotions to the audience.”

Despite the fact that the story is centered upon a specific political event, Lee thought that the film could earn empathy from the public, especially those facing the monotony of having to get up from bed every day to go to work.

“I think all workers can sympathize with the film,” Lee explained. “Even though the movie covers a dramatic and specific event, at the end of the day, it’s very private, as if the characters are playing mind games against one another. It’s about their delicate feelings and conflicts - loyalty, jealousy, betrayal and envy - things that any worker would be able to comprehend. I think that’s the real takeaway of this film that the audience would find entertaining.”

As much as the film was careful not to deviate from the actual history, Lee was extra careful to stick to his scripts as well.

“For instance, in ‘The Fortress’ (2017) and ‘Masquerade’ (2017), the characters [I played] were from a long time ago, and thus the data on them was lacking. So actors and directors had some room left [to add their own thoughts and creativity],” Lee said. “But contemporary figures leave very little room for that. So I tried to bar any personal thoughts and feelings [when I acted] and worked within the script as much as possible.”

But Lee did add a noticeable detail to the character - whenever Kim is feeling nervous or agitated, he irritably smooths out his hair to maintain its perfect shape.

The actor was inspired to add the detail when he saw an actual video clip of the trial of Kim Jae-gyu.

“Maybe it might not have been his usual habit, but [at the trial] he had already spent some time in prison and his hair was growing out. Since there wasn’t any product, his hair naturally fell on his forehead and I saw him flipping his hair over in a very skittish and edgy way. After watching that clip, I thought I could apply this to my role.”

At the end of the interview, Lee also expressed his excitement for the approaching Oscars.

“The amount of spotlight ‘Parasite’ is receiving and its achievements will be very critical to the future of Korean cinema,” Lee said.

“This is the 101st year of the birth of local film, and if [‘Parasite’] can be the first to shine through at this important event, I believe that things may be very different for Korean cinema from that moment on. [Receiving an Oscar] might give the local film industry the boost it needs.”