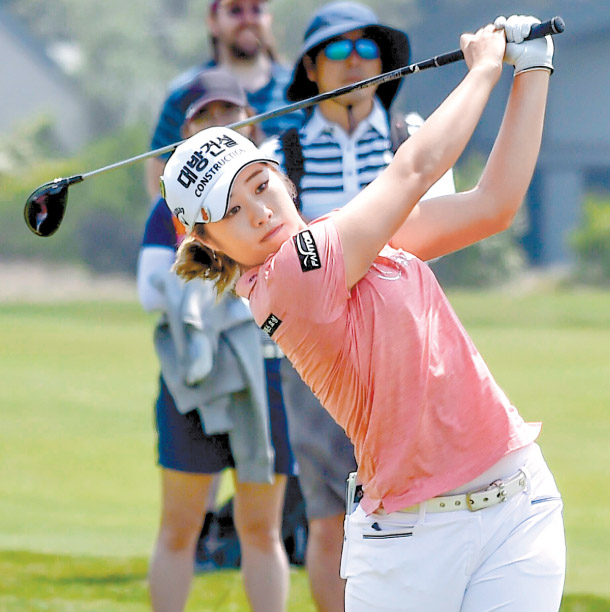 Lee Jeong-eun hits her iron shot during the first round of the ISPS Handa Vic Open at the 13th Beach Golf Links in Victoria, Australia, on Thursday. [GOLF AUSTRALIA]

After a successful 2019 season, where she won the LPGA Tour’s Rookie of the Year award, Lee Jeong-eun is ready to prove that the second-year jinx does not apply to her.

With the completion of seven weeks of tough training to build strength, Lee has finally started her season in Australia, as she competes at the ISPS Handa Vic Open, which is being held from Thursday to Sunday.

From this competition, Lee will be competing in four straight LPGA tournaments, two in Australia, including this week’s, one in Thailand and another in Singapore.

Looking at Lee’s 2019 rookie season on the LPGA Tour, she was a dominant player. Although she only picked up one win, it turned out to be a major tournament, the U.S. Women’s Open, and that was good enough for her to win the once-in-a-lifetime award, Rookie of the Year. In addition to this major victory, Lee’s consistency throughout the season also made quite the impression. She had 10 top-10 finishes and finished third in the 2019 official winnings ranking.

Due to this, the standards are set much higher this season for Lee.

As of the most recent update on the Rolex Women’s World Ranking, Lee is in eighth place. Lee is entering her second season with the bar set high as she hopes to pick up three wins and hopefully an Olympic medal.

Since her time during the KLPGA Tour, Lee has been known for her tough training in the winter. She first started back in her first year in high school, and as she saw good results, Lee continued the same training routine every winter. Once again, after the 2019 season ended, Lee headed to Haenam County, South Jeolla, for her seventh year.

In September last year, Lee said that she will be working harder than any other season for 2020, the year the Olympics are being held.

Although qualifying for the Olympics in women’s golf may sound easy to countries where golf is not a popular sport, in Korean women’s golf, it’s more competitive than ever.

A total of 60 golfers will qualify for both the men’s and women’s tournaments at the Olympics, two golfers from each qualifying country, although an exception is made for extremely high-ranking players.

As there are already five Korean golfers ranked inside the top 15, this season is expected to be more competitive than ever. The players will be determined based on the Rolex Women’s World Ranking as of June 29, this year.

Due to this, Lee once again headed down to Haenam for a month, even spending Christmas and New Year’s there. She’s stuck to an even tighter schedule than ever before, training six days a week, from the early morning to late at night.

Her training schedule included stretching, running stairs and hills and weight training. She’s focused on running a lot as she thought her performance in the last five tournaments of the 2019 season, where she failed to finish within the top 10, was due to a lack of energy.

“Jeong-eun has great energy,” said her trainer. “This winter, we focused on trying our best to [maintain her condition] at this level. Since she has to move around a lot in the United States and has a tight schedule, it’s not easy to take care of her physical condition. We believed that keeping her condition good was important.”

When it comes to training, Lee is probably one of the most determined players ever.

“Every time she achieves her goals, she sets another one and tries to achieve that,” her trainer said. “And that looks great. She thoroughly completes her training log. When something doesn’t work out, she checks her log to see what she’s missing and continues training.”
In terms of her swing, she focused on strengthening her abs and back.

After her training in Haenam ended, Lee headed straight to Thailand for another three weeks of training, where she focused heavily on her putting. Last season, Lee was ranked 58th in average putts, at 29.87, but when she hits the green in regulation, her average putt was at 1.79, ranking 38th.

After focusing on playing on real grass and putting in Thailand she headed straight to Australia to compete at the ISPS Handa Vic Open.

Looking at the result after the second round of the tournament, Madelene Sagstrom of Sweden currently leads the field at 13 under par, 132, followed by Ally McDonald of the United States at 12 under par.

Among the Korean golfers, Cho A-yean is currently ranked the highest, tied for third by shooting a two-day total of 10 under par.

Considering this her first tournament of the season, Lee isn’t off to a horrible start as she is currently tied for 11th at eight under par, 137.