Park hopes to be early bird catching the worm

Park hopes to be early bird catching the worm

To defend the Olympic title, Park In-bee is making an appearance in Australia for the first time since the 2012 season.

As Park set her sights on defending her gold medal from the 2016 Rio Olympics last year, she is making the earliest start to her season since 2016. Park normally starts her seasons in March, but this year she began in January. 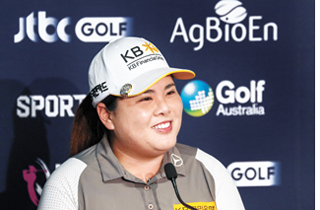 Park In-bee speaks during a press conference, ahead of the ISPS Handa Women¡¯s Australian Open on Wednesday. [GOLF AUSTRALIA]

Although she got off to a strong start by finishing runner-up at the Diamond Resorts Tournament of Champions presented by Insurance Office of America in January, she’s been struggling since then. Park missed cuts in the next two tournaments. Due to this, her latest world ranking dropped one spot.

This week, Park will be once again back on the course to improve her world ranking and to garner a spot on Team Korea for Tokyo. Currently, Park is ranked 17th in the Rolex Women’s World Ranking.

For other countries, ranking 17th in the world might be good enough to earn a spot to the Olympics, but in Korean women’s golf, that is a little far from earning a spot. Looking at the most recent world ranking, there are five more Korean golfers ranked above her.

“It’s probably tougher than getting a medal in the Olympics to make the team,” Park was quoted on saying on the LPGA website. “I probably have to win a couple of times early this season to try to make the team. Maybe one might do it, I might have to do a couple, which is not easy to do. So, I am really driving myself to play well and acts as a kind of a motivation, that really drives me well too.”

Making matters worse, Park is in a more urgent situation for a win than expected, as the entire Asian Swing throughout the months of February and March got wiped out due to the coronavirus scare.

To get her world ranking up, a win will be a must, and aside from the Olympics, she is in need of a victory as Park hasn’t won a tournament since the Bank of Hope Founders Cup in March 2018. Having won a total of 19 LPGA Tour events, Park is still just one shy of reaching her 20th career win.

Park will play her first round of the ISPS Handa Women’s Australian Open along with Ryu So-yeon and Su Oh of Australia, starting at 10:45 a.m., Korea time, starting from the first hole today.