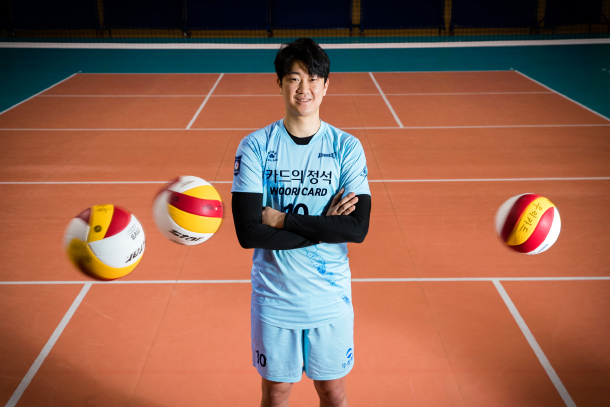 The Seoul Woori Card Wibee is again having quite an impressive season, and amid its success, Na Kyeong-bok has arisen as the team’s surprise star.

Since joining the Korean Volleyball Federation (KOVO) in the 2009-10 season, the Wibee was considered one of the weakest teams in the league and only advanced to the playoffs for the first time last year when it finished third in the regular season.

But this year, it looks even better than ever thanks to Na’s beyond impressive performance. With a 10-game winning streak, the Wibee is now back at the top of the KOVO leaderboard with 22 wins and seven losses.

Looking at Na’s statistics, he is ranked sixth in scoring, with 433 points. This is good enough to be tied for first among the domestic players as of Sunday. Back on Nov. 27, 2019, during a game against the Daejeon Samsung Fire & Marine Insurance Bluefangs, Na reached his first triple crown, where he successfully made three serves, block and attacks in a single match.

“I look at the record sometimes, and I’m happy that [our] ranking this season is high,” Na said. “We’ll have to play better from now on. Other teams are also great at concentrating toward the end of the season. I’ve probably had the most interviews throughout my volleyball career. They always ask me about what has changed, and I think it’s my confidence. After I joined the pro league, I lost confidence because I wasn’t meeting expectations. But now, I started to think that I can do it, too.”

Na was drafted first by the Wibee in 2015. As the team was struggling at the bottom of the league standings, Na’s development was also slow.

“I had a big dream when I became a professional player, but as I started playing badly on the court and the team kept on losing, I started to lose confidence. Later on, I just started to think that it’ll be good enough if I can be on the court.”

Back when Na was in college, he played as a right side hitter, but once he joined KOVO, he mostly played as an outside hitter. The position of outside hitter requires a player to be good at both offense and defense, especially in serve receive. However, Na’s average receive success rate, over the four seasons, was only 19 percent.

“When I had to receive a powerful serve, I got surprised, so I received them in awkward positions, which led me to make a lot of errors,” Na said. “I trained a lot and watched a lot of clips, but it wasn’t getting any better. So I didn’t know what to do.”

Due to this, many evaluated Na as an inconsistent player, and a lot of the fans criticized him on his personal social media account. Despite having a laid-back personality, the abuse got too much, and Na had to delete all his accounts. To this day he says he doesn’t really read the comments on articles about him.

Na’s career final started to turn around when head coach Shin Young-chul took the helm of the Wibee in 2018. Once he got appointed, Shin selected Na as Wibee’s starting outside hitter.

From that point on, Shin patiently worked with Na to fix all his bad habits and improve his receives.

“I hit [the volleyball] when I thought it was at its peak but it wasn’t,” Na said. “Since I was rushing, I was just reaching my arms out in receives.”

Shin emphasized to Na to “move your feet first when the ball comes and then receive it.”

Having worked closely with Shin, he slowly got better, and it’s finally paying off this season, as his receive success rate hugely improved and now stands at 31.36 percent.

“If he wasn’t the head coach, then I wouldn’t have changed this much,” Na said.

To pay Shin back for believing in him, Na says he and his team are determined to lead the Wibee to its first-ever championship title. Shin had spent his career as head coach in KOVO for 11 seasons and managed to lead his clubs to eight playoffs but has never won.

“When we have the chance, we’ll definitely grab it,” Na said.