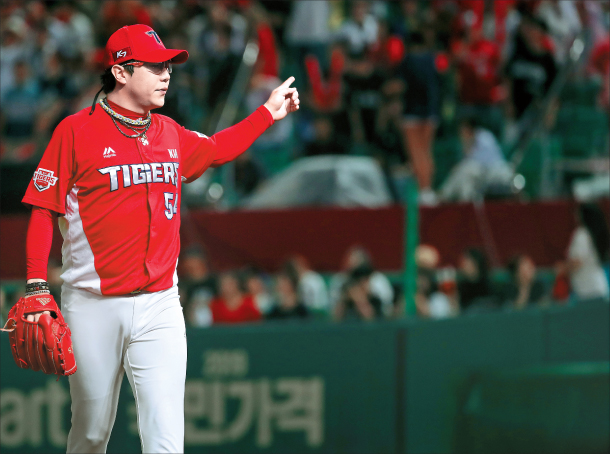 Until the 2012 season, the KBO had three dominant left-handed Korean pitchers — Ryu Hyun-jin, formerly of the Hanwha Eagles, Kim Kwang-hyun formerly of the SK Wyverns and Yang Hyeon-jong of the Kia Tigers.

But once the 2012 season ended, Ryu left to the majors and now plays for the Jays, and Kim has just departed for the United States after signing a contract with the St. Louis Cardinals, leaving Yang the only leftie left in the league.

However, Yang is also not expected to stay for long as his dream is to follow in the footsteps of Ryu and Kim and play in the big league.

Like Kim and many other KBO players, Yang tried to get to the majors through the posting system back in 2014 but failed to come to an agreement in terms of contract.

Due to this, he put aside his dreams and focused only on playing for the national team and the Tigers.

“I previously wanted to go to the foreign league, but I don’t think I was ready,” Yang said. “I feel like now is really the time for me to try. This year is [probably] the last time for me to try and reach the big stage. I’ll prepare well and get there.”

As Yang will become a free agent (FA), he has set his sights on the majors, and the Tigers, too, have said that they are willing to support his decision.

Since his performance this year will determine his future, he’s preparing for it harder than ever.

Last year, Yang wasn’t able to start his spring training with the Tigers on time, due to a family issue. The late beginning led him to the worst start to his season that he’s ever had where he recorded five losses in his first six starts.

Since Yang had been the Tigers’ No. 1 pitcher in the starting rotation, his struggle also played a factor in the the club falling to the bottom of the table in the KBO’s regular season standings.

But this year, he has started spring training on time with the Tigers at Fort Myers in Florida.

As the Tigers’ ace pitcher, he’s been a role model to many within the club and the league and that hasn’t changed at spring training. Even after Yang is finished with his session, he waits and watches others finish and cheers them up.

This attitude and his team player mentality made quite the impression on the Tigers’ newly appointed manager, Matthew Williams, who ended up choosing Yang as captain.

Yang joined the Tigers in 2007 and has been playing for 14 seasons, but this is the first time that he’s been chosen as captain.

Normally, the club’s managers don’t appoint their No. 1 starter as captain as the role requires them to do a lot of work off the field such as balancing out the players’ opinions and communicating well with coaching staff.

Although Yang was surprised by Williams’ decision, he eventually accepted it.

And despite his major league hopes, he hasn’t given up on garnering success for the Tigers.

In the 2017 season, the Tigers won both the regular season and the Korean Series. Following the success, Yang was selected as the MVP for both.

The Tigers didn’t make any changes to the roster after that impressive season, but started to fall down in the following season and finished fifth in 2018 and seventh in 2019, meaning they are the underdogs to take the title this season.

The Tigers again made few changes to the roster but did appoint the former Washington Nationals manager. However, they did lose their FA second baseman An Chi-hong to the Lotte Giants.

“Many expect our team to be ranked lower, but I never thought that,” Yang said.

The Tigers’ performance isn’t the only thing Yang has to think about this year.

He is also expected to perform at his best for the Korean national baseball team at the 2020 Tokyo Olympics this summer.

As the major league players, who are in the 40-man roster, are unlikely to compete in Tokyo, Yang is expected to take the place of Kim.

Team Korea may have qualified for the Tokyo Olympics, but a runner-up finish after losing to Japan in the final, at the World Baseball Softball Confederation (WBSC) Premier 12, left fans disappointed and concerned. In the latest WBSC world ranking, Korea is ranked third in the world, behind Japan and the United States.

Korea will enter the tournament as defending champion as they won the 2008 Beijing Olympics. After the Beijing Games, baseball was removed from the Olympics but made its return this year.

Dreams for the majors, success for the Tigers and an Olympic medal are all top priorities for Yang, not his statistics.

“Rather than my personal statistics, my priority is the team and the national team’s results,” Yang said.