Seals from Joseon era are returned to Korea

Seals from Joseon era are returned to Korea 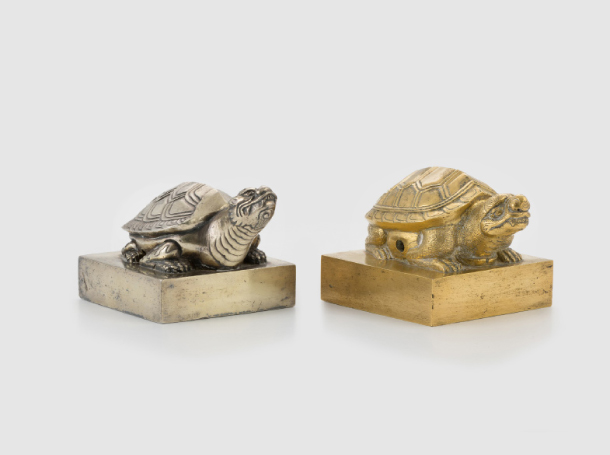 Daegunjubo, a national seal crafted in 1882 during the reign of King Gojong (1852-1919) in the Joseon Dynasty (1392-1910), and Hyojongeobo, the royal seal of King Hyojong (1619-1659) made posthumously to commemorate his achievements in 1740, were repatriated to Korea from the United States, the Cultural Heritage Administration announced Wednesday.

“We are happy to announce the return of the national treasures to its founding land,” said Chung Jae-suk, head of the administration at a press conference at the National Palace Museum in central Seoul.

“As you very well know, Korea lost many of these valuable national treasures during the Japanese occupation of Korea [1910-1945] and during the Korean War [1950-1953],” Chung said. “Two of the treasures lost during this time have come back to us. These are treasures that stand as evidence of the country’s tradition and identity.”

Daegunjubo is a silver seal measuring 7.9 centimeters (3.11 inches) in height and 12.7 centimeters in length with a turtle-shaped handle. It weighs about 4 kilograms (8.81 pounds).

It is one of six that Gojong used in the 1870s and 1880s on diplomatic documents. The other five are still missing, according to the heritage administration. Hyojongeobo is one of four royal seals made to commemorate the achievements of Hyojong. After this recent find, two of the four are missing.

How the seals returned to their homeland is a story of individual patriotism. “We don’t know when exactly the seals left Korea,” said Seo Joon, former researcher at the palace museum. “But we suspect it was between the time they were handed off to Japan during colonization and the end of the Korean War.”

The two seals were picked up at an auction in the United States in 1995 by Lee Dae-soo, a Korean citizen residing in New Jersey. “When my father came across these seals at the auction, he purchased them, determined that one day he would return them to Korea,” said David Lee, son of Lee Dae-soo, at the press conference Wednesday.

In 2017, an acquaintance of Lee got in touch with the director of the Korean Cultural Heritage Foundation in New York City, Kim Hyoung-keun.

“The acquaintance came and asked if I could take a look because they knew I have experience examining historical artifacts of Korea in the United States,” said Kim, who also attended the press conference. “And once I took a look, I thought they will need examination by actual experts.”

Kim got in touch with Shin Young-geun, a former deputy secretary general of the Overseas Korean Cultural Heritage Research Institution, who contacted the Cultural Heritage Administration. Officials visited Lee in March 2018 and confirmed the seals to be real.

“The return of the seals this time is extra meaningful because Lee cooperated with us and agreed to donate the seals,” Chung said. “We intend to continue to work with authorities in the United States and other nations to help bring home more missing national treasures of Korea.”

There are still 73 seals made during the Joseon Dynasty that are missing. If records are correct, there should be a total of 412. According to experts, the existence of Daegunjubo is particularly significant because it is evidence of Gojong’s message to neighboring nations that he intended to rule Joseon as a sovereign state.

“Before Gojong’s time, kings of Joseon used a seal that reads ‘Joseongukwangjiin [The Seal of the King of Joseon]’ when communicating with the Ming and Qing dynasties,” said Lee Tae-jin, honorary professor of Korean history at Seoul National University. “But then Gojong ordered this seal to be made during his reign, which reads ‘Daegunju [Emperor] of Daejoseonguk [Joseon Dynasty].’ That sent a clear message to emperors of neighboring nations that Gojong was placing Korea on a level of equal national status.”

Royal seals are set apart from national seals in regard to their purpose. National seals are actual stamps used by kings during their reign. Royal seals are made to remember the king’s achievements. Hyojongeobo is a gold seal that measures 8.4 centimeters in height and 12.6 centimeters in length, with a turtle-shaped handle, created to present the title “Myeonguijeongdeok,” which roughly translates to “Bright Righteousness and Correct Virtue,” to Hyojong in 1740. It also weighs about 4 kilograms.

The two seals will be on public view at the museum from today until March 8.