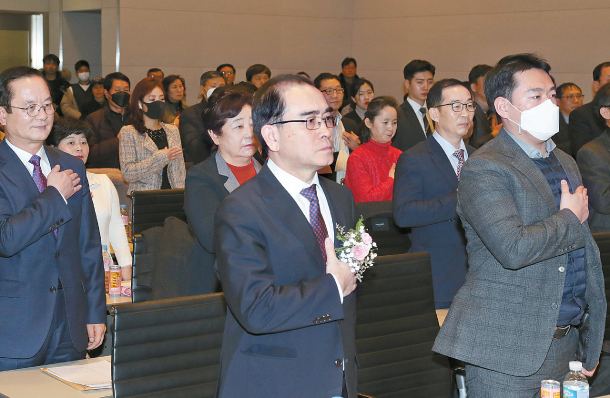 Around 200 North Korean defectors, including Thae Yong-ho, left, hold a meeting to found their own political party at a convention hall in Seoul on Tuesday. [YONHAP]

North Korean defectors turned political activists in the South are pursuing the creation of their own political party to represent thousands of escapees resettled in South Korea.

At a convention hall in western Seoul on Tuesday, around 200 defectors - many of them prominent North Korean activists - announced they would found a political party tentatively called the “South-North Unification Party” to compete in this April’s upcoming general elections.

In a statement summarizing their objectives, the group said it seeks to build a party “able to capture both the similarities and differences between all 80 million South and North Koreans” and that it would address the “terrible reality” faced by the North Korean people living in “the most deplorable conditions of violations to human rights and freedom.”

Kang Chol-hwan, an activist and former Chosun Ilbo journalist best known for writing a memoir about his childhood in a North Korean prison camp, said the group was prompted to make an active foray into South Korean politics due to a “necessity to [build] a political force able to represent the rights” of both the North Korean defector community in the South as well as the rest of the North’s population.

Stressing that approximately 35,000 North Korean defectors in the South were “the group North Korea’s Kim Jong-un regime fears the most,” Kang added the party would work toward North Korea’s democratization.

Also present to deliver a congratulatory address at the event was Thae Yong-ho, a former North Korean deputy ambassador to Britain who was recruited by the United Future Party, formerly the Liberty Korea Party, as a district constituency candidate for April’s elections.

Thae lauded the move by his compatriots to build a political force of their own, saying that the existence of this new party would help consolidate North Korean defectors in the South as well as encourage more people to defect from the regime.

Both figures, as well as many other activists at the ceremony, also took the opportunity to unleash a variety of criticism on the Moon Jae-in administration, which they regard as being overly passive toward the North.

While Tuesday’s event was unprecedented in that it was the first time defectors sought to build their own party, North Korea-focused activists in South Korea have played prominent roles among conservative circles, often promoting hard-line policies toward the regime in Pyongyang.

Some defectors in the South, who wished to remain anonymous due to concerns over their personal safety, expressed concern that an enlarged political voice by such activists dabbling in aggressive antigovernment rhetoric may generate antipathy among South Koreans toward defectors.