Samsung Lions’ young pitcher Yang Chang-seop is slowly making his way back to the mound at the Daegu Samsung Lions Park this season. 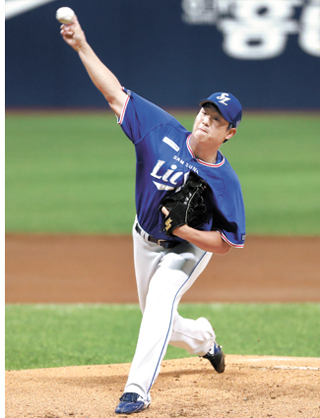 After a year off, the Lions¡¯ young pitcher Yang Chang-seop hopes to make a successful return to the mound.[ILGAN SPORTS]

A year ago during the Lions’ spring training for the 2019 season, he wasn’t able to complete the program in Okinawa, Japan, due to pain in his elbow.

Although it was temporary, he headed straight back home and started rehabilitating.

Then, shortly after, he underwent an elbow surgery and skipped the entire 2019 season.

This was a disappointment for both the Lions and Yang, as he left quite an impression in his rookie season in 2018, picking up seven wins and six losses with a 5.05 ERA.

Having spent the entire 2019 season rehabilitating, Yang has finally re-joined the Lions’ roster for spring training in Okinawa this year and is preparing to make his return to the mound.

This year, Yang and Won Tae-in’s names have been continuously mentioned as the key players for the Lions’ starting rotation.

As the Lions finished eighth in the 2019 regular season standing in the KBO, with 60 wins, one draw and 83 losses, they are hoping that the young starters can change things up in addition to the return of the KBO’s legendary closer, Oh Seung-hwan.

Below are edited excerpts of Yang’s interview with Ilgan Sports.

Q. How do you feel right now?

A. While I was resting for a year, I began with the ITP [interval throwing program] and worked my way up to pitching, without seeing much trouble. I’m not concerned about my injury reoccurring.

How did you feel when you first heard that you needed to get elbow surgery?

Since my arm was hurting so much, I felt that I would have to undergo surgery. I was really sad at first, but since senior players like Kwon Oh-joon, Yun Sung-hwan and Baek Jung-hyun are still pitching, even after they had surgeries, I kept my hopes up. A lot of the senior players on our team encouraged me by saying, “Just consider this as growing pains everyone goes through.” I was disappointed at first but was able to get through it.

Were you ever stressed about the whole rehabilitation process?

In the beginning of the rehabilitation, I wasn’t even able to move my arm. It was hard because I really wanted to throw baseballs. So I tried tossing with my left arm, and whenever the Lions played at Jamsil, I visited to say hi to the players and watched the games. I’ve also watched them through TV, but my only thought was to get back as quickly as possible and help the team.

Ahead of spring training, you started practicing with Oh Seung-hwan, the current record holder in KBO saves. How was that?

Back when I was in elementary and middle school, Oh Seung-hwan was a legendary closer that led the Samsung Lions to dominate the KBO. It was just a great honor and time for me to train with someone who has had such success and a lot of experience in Japan and the United States.

What did you learn from him?

He told me my problems in my pitching, and using that as a base, I’ve been improving. We would play catch ball, but even that was so good that it surprised me. It may be just simple catch ball, but I felt that this may be why he is successful. Rather than tossing light pitches, he was throwing all his pitches as best as he could, and this left me with quite the impression. He told me that I need to work hard to create and throw pitches until it becomes a habit. That’s how I can execute [my pitches] in actual games. So I’m working hard to do that everyday.

What are you focusing on during spring training?

I’m working on my pitching balance and taking care of my arm. Since it’s been less than a year since I got my surgery, I need to adjust to throwing pitches. Not only during spring training, but also when I get back to Korea, I will focus on not being in pain even when the weather is colder.

There are a lot of expectations on you. Do you feel any pressure about that?

I don’t feel under much pressure. I’m going to learn, and this year, I’ll try my best for the team.

I want to finish a successful season without pain or injuries. I want to perform better than my rookie season, and I hope our team advances to the postseason.