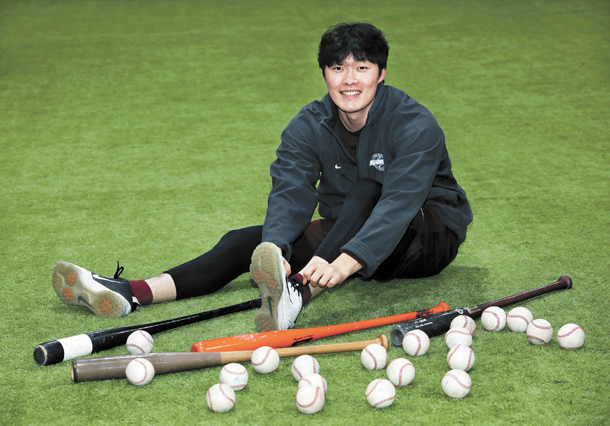 For the Kiwoom Heroes’ outfielder Lim Byeong-wuk, sleep is the absolute priority.

“I hear that I’m unique, quite often,” Lim said.

Sleep is not just his absolute priority, it’s also his favorite thing. He gives up eating to sleep, and before games, when all the meetings and treatments are going on, Lim takes a short break to complete his only pre-game ritual, a nap.

And being so well-rested undoubtedly plays a big factor in Lim’s concentration at bats. In the KBO, the batters’ walk-up songs no longer exist, but the fans still have the songs they sing for each of their batters. However, when he’s at bat, he is too focused on hitting against the pitchers that he can’t really hear his anthem.

“I can’t really hear it,” Lim said. “I can hear it from the bench and when I’m waiting for my turn. I’m sure all the other players are like that too. I think I just automatically block the noise.”

Lim had a lot of minor setbacks that prevented him from playing in all of the games, but this year, he is hoping to get through the year without any injuries.

To be in the best shape possible, he’s been bulking up this season, through weight training and by eating proper meals, in addition to getting all the sleep his heart desires.

Lim first started his life as an athlete as a swimmer. Although he was too young to be called a competitive swimmer, as he was only in his third grade and competed for six months, it was clear from early on that he was born to be an athlete. His main event was butterfly, and within the short period of time he competed, he was good enough to be selected to represent his city.

“I was pretty good,” Lim said.

But it was Lim’s father who gave him the push to become a baseball player. Lim’s athleticism runs in the family, as his father used to be a handball player. Since Lim was fast and strong and his father thought he had a strong shoulder, it seemed like he was made for baseball.

“I think if my [older] brother had better athletic ability, then I think he would have played sports,” Lim said. “But since I am more athletic than him, my brother focused on his academics while I chose to be an athlete.”

When his father first took him to the baseball field, Lim said he had no knowledge of the game whatsoever.

“Since I got there without any knowledge, I was wondering why this guy was running and what they were doing,” Lim said. “Then, they made me do this and that. And it was fun.”

After the initial week of trying it out as his father suggested, Lim decided he wanted to keep it up. Since then, he has identified as a baseball player, but it wasn’t until his third year in high school that he decided to turn pro.

“I started to think that [since I played for this long] I should try to get to the pro [league],” Lim said. “So I played really hard.”

He was first drafted as a shortstop, but once he actually joined the Heroes, he switched his position to an outfielder.

“Since I was little, I played as a shortstop and as a center fielder a lot,” Lim said. “But I liked center fielder better. As for shortstop, you get to play that position when [the coaches] believe that you have the best physique for it. So I played as shortstop for the draft and when [my high school team] needed one.”

As Lim was drafted as shortstop, he had special affection for the position, but in the end, he had to choose to start his pro career as a center fielder as that’s what he and the coaches thought would be a better fit. Looking back at his decision, he said he does have some regrets.

“I do have regrets,” Lim said. “Because shortstop is a position with quite some merit. But I decided to switch because I thought doing something I’m good at would be more fun and I would enjoy it more.”

Lim may just be beginning his career in the KBO, but looking at the numbers so far, the 2018 season was by far his best. It started with a slight change, a new jersey number.

Every player has their own jersey number, and Lim decided to choose a unique number, perhaps an unfamiliar number, 0, starting from the 2018 season.

“I have a lot of circles in my name [when written in Korean],” Lim said. “There are a lot of meanings, like don’t get injured or start over.”

Having played in a total of 134 games, Lim finished the season with a 0.293 batting average with 124 hits and 13 home runs. But his performance in the postseason was what left a lasting impression on the fans.

“At that time, that one whole season just went well,” Lim said. “I wrote down my own statistics that I want to achieve before the season, kind of like a bucket list. I’ve achieved them all. When we got to the postseason, I enjoyed it and had fun.”

Playing in the postseason definitely meant more nerves, but Lim said it was also the time that he enjoyed playing baseball the most as everything was just going well for him.

“I think I had the most fun at that time,” Lim said. “I was nervous because if I were to do something, I could have become a hero or could have taken all the responsibility for the loss.”

To continue his success, Lim headed to the United States to get swing lessons, but that plan didn’t turn out the way that he had expected. Once the 2019 season started, none of his outstanding performance from the 2018 postseason was seen. Instead, he had to finish earlier than others to get knee surgery.

“It’s gotten a lot better,” Lim said. “I think I’ve rehabilitated about 80 percent. So I can run and get some skills training as well as weight training.”

Throughout 117 games, Lim finished with a 0.243 batting average with 92 hits and no home runs.

As for his poor performance in the 2019 season, Lim pointed out the uncertainty he had about himself. However, finishing the season earlier than others allowed him to learn a bigger lesson which he said he did by reading a lot of books.

“When I thought about it, I didn’t really just lose,” Lim said. “I gained a lot so it was pretty good.”

While Lim had to finish his most recent season early, the Heroes ended up playing the longest, making it all the way to the Korean Series title final. But maybe Lim was missed as the Heroes lost to the Doosan Bears. However, Lim said watching his team from a different perspective incentivized him to get back on the field as soon as possible.

“I did think about that for a little bit,” Lim said. “If I wasn’t sick and kept on playing, I thought that I may not have played as well as I did [compared to the 2018 postseason]. Instead, I could have been a burden. At one point, I think it was a good thing that I left the team. When I watched them from the stands, it motivated me to return quicker, and I got to understand why the fans were criticizing us.”

As for his bucket list for this season, Lim is keeping that to himself. However in the long term, his goal is to get recognized for not just what he is, but also who he is.

“I want to be recognized as a baseball player and as a person,” Lim said. “I think that’s enough for me.”