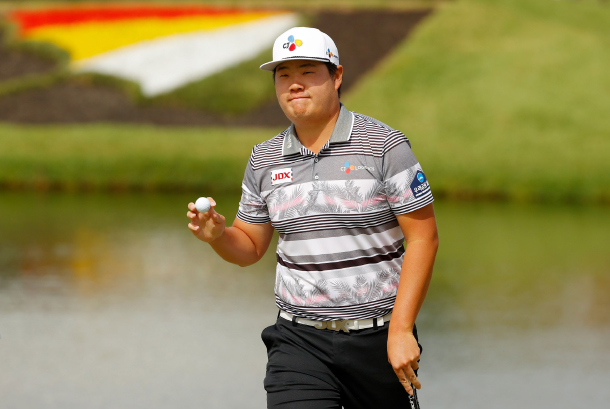 Im Sung-jae picks up his ball on the green during the final round of the Arnold Palmer Invitational Presented by MasterCard at Bay Hill Club and Lodge in Orlando, Florida, on Sunday. [GETTY IMAGES/YONHAP]

Im Sung-jae, the reigning PGA Tour rookie of the year, climbed to the top of the FedEx Cup points standings following a third-place finish at the Arnold Palmer Invitational in Orlando, Florida, on Sunday (local time).

The 21-year-old Korean picked up his first PGA Tour victory the previous week at the Honda Classic. He was trying to become the first player since David Duval in 1997 to win his first two career titles in consecutive weeks but finished two strokes behind the champion, Tyrrell Hatton of England, to end up alone in third at two-under 286 at Bay Hill Club and Lodge.

Im carded a one-over 73 in the final round, which featured three birdies, two bogeys and one double bogey. Only one player, Matthew Fitzpatrick of England, broke 70, as he closed with a 69. Just four players finished under par for the tournament, the fewest at Bay Hill since 1980.

Im has collected 1,458 points in the FedEx Cup race to move past Justin Thomas (1,403) of the United States into first place. The top 125 after the end of the regular season in early August will qualify for the playoffs.

Im also went up a spot to take second place on the money list with over $3.86 million. Thomas, who has two victories this season, leads the way with $4.21 million.

Im had one birdie and eight pars on the front nine at Bay Hill to stay in the hunt. He had his first bogey of the day at the 11th but made up for it with a birdie at the 12th.

But the disaster struck at the par-4 13th. After a tee shot to the left side of the fairway, Im had 110 yards to the hole behind a pond. He came up well short of the target and dunked his tee shot into the hazard en route to a double bogey.

Another bogey at the 15th took him further out of contention. Im bounced back with a birdie at the 16th but missed a 13-foot birdie attempt at the finishing hole to settle for third place.

“Overall, I felt good today because I got to compete for the title once again,” Im said after the round. “I had some disappointing plays in the second half of my round, so I couldn’t get the result I wanted but I’m very satisfied about how well I finished this week.”

Regarding his double bogey, Im said after the round that he made the wrong club choice.

“I had about 100 meters [109 yards] and was against the wind,” Im said. “Right at that moment, I thought I can get it there with a 52-degree wedge, so I took my swing using that shot. But it was a tight club choice. So it went into the hazard, and I made a double bogey.”

Although Im missed out on winning his second straight title, he said he was still satisfied with his performance over the weekend.

“I think I can give myself a score of 90 or more,” Im said. “No, maybe a 95 or higher. I think being able to win last weekend and compete for the title again this week helped boost my confidence.”

He’s had five top-10 showings in 14 tournaments this season. Im’s consistent performance has allowed him to make another jump in his world ranking. By recording another top-five finish, Im is now ranked 23rd.

The PGA Tour will continue its season this week when The Players Championship kicks off from March 12 to 15 at TPC Sawgrass in Florida. Once again, Im Sung-jae will compete.