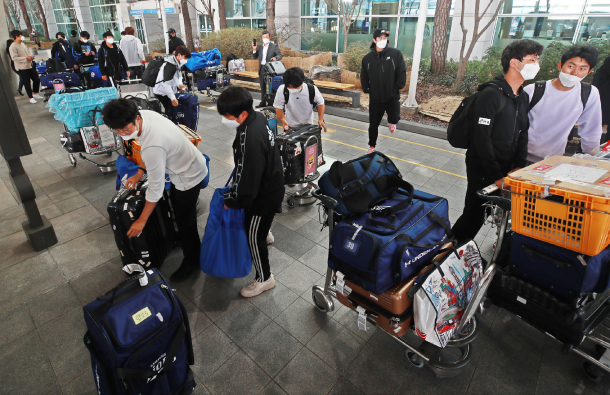 Although it’s still uncertain when the 2020 KBO season will start, some of the clubs had to make their return from spring training earlier than anticipated due to the coronavirus.

The outbreak of Covid-19, the official name for the novel coronavirus, has wreaked havoc across the sporting world in Korea, which started when local leagues began postponing their seasons or making changes to their match locations.

The KBO followed suit and announced the cancelation of the entire schedule of its exhibition games this season, the first time it has ever happened in history - a move which lead the 10 clubs to try and extend their spring training schedules.

However, the clubs were faced with a completely different issue once countries started implementing travel bans, raising travel advisories as well as self-quarantine on Korean travelers. Rather than trying to extend their schedules, clubs were suddenly frantically searching for flights home as many airlines began canceling or cutting back on their regular routes.

The Kiwoom Heroes struggled the most with this issue and ended up having to charter a flight from Taiwan which was set to return today. The Eagles, too, arrived a day earlier than scheduled after their original flight got canceled.

The LG Twins and the Samsung Lions, who originally extended their spring training, ended up returning earlier than expected on Saturday and Sunday, respectively, due to the same issue. They were followed by the Dinos and Doosan Bears. While the KT Wiz made their way back on Monday, the SK Wyverns, the Hanwha Eagles and the Heroes will be arriving today.

Only two clubs - the Lotte Giants and the Kia Tigers - extended their spring training.

Also, about half of the clubs allowed their foreign players to head back home. Foreign players from the Twins, Lions, Heroes, Eagles and Wiz all decided to stay at home until the official start date of the season is announced. The foreign players are expected to return to Korea in time for the tune-up games.

The KBO will hold their committee meeting today. Last week, the KBO announced that they’ll finalize their decision regarding postponing the season by March 14, at the latest, as the clubs will need two-weeks notice before the start date to schedule practice games.

The KBL will resume their season on March 29 while KOVO hasn’t decided, yet.

The WKBL announced on Sunday that they’ve decided to suspend the remaining season for at least two weeks, starting from today’s matches. The WKBL and KOVO were among the first two local leagues to continue their regular season at empty stadiums. However, as the outbreak worsened, the KBL announced a break from the season. Then shortly after, KOVO, too, had to suspend their season as all 13 clubs in the league requested to do so.

The WKBL started their two-week break after Monday’s match between the Shinhan Bank S-Birds and the Hana Bank. The WKBL will suspend their season until March. 24.

In the KBL, three players - Allen Durham and Byron Mullens of the KT Sonicboom and Boris Svovic of the Goyang Orions - canceled their contracts to head back home, while in KOVO, two players - Andrea Santangelo of the Samsung Fire & Marine Insurance Bluefangs and Adora Anae of the Industrial Bank of Korea Altos - also decided to leave Korea.

Over in the world of tennis, the BNP Paribas Open, which was expected to be held in California starting today, also got canceled.

According to the announcement released on the official tournament website, “The Riverside County Public Health Department has declared a public health emergency for the Coachella Valley after a confirmed case of coronavirus locally. As a result, the 2020 BNP Paribas Open will not take place at this time due to the concerns surrounding the coronavirus and the safety of the participants and attendees at the event.”