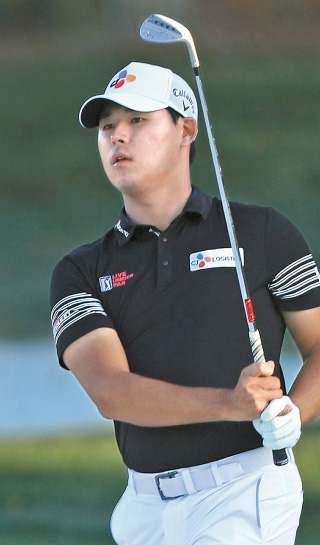 Kim Si-woo watches his shot during the first round of The Players Championship at TPC Sawgrass in Florida on Thursday. [GETTY IMAGES/YONHAP]

The novel coronavirus has taken its toll on the PGA Tour.

The PGA Tour, which was continuing its season, announced Thursday the cancellation of The Players Championship, known as the “fifth” major on the Tour, at TPC Sawgrass in Ponte Vedra Beach, Florida. This comes as a huge blow to those players who are ranked at the top of the leaderboard, as this tournament has one of the highest purse on the PGA Tour this season at a total of $15 million.

The PGA Tour made the announcement on their website saying, “We have pledged from the start to be responsible, thoughtful and transparent with our decision process. We did everything possible to create a safe environment for our players in order to continue the event throughout the weekend, and we were endeavoring to give our fans a much-needed respite from the current climate. But at this point — and as situation continues to rapidly change — the right thing to do for our players and our fans is to pause.”

The statement added that all the events, “across all of the Tours,” will be canceled until the Valero Texas Open, which was originally scheduled to tee off from April 2 to 5.

The cancelation of The Players Championship is particularly disappointing for Korean golfer Kim Si-woo, as he was tied for second after the first round with a score of seven under par, 65.

Kim’s name toward the top of the leaderboard was especially positive news as he hasn’t won a tournament since the 2017 The Players Championship. A win in 2017 allowed Kim to secure his PGA Tour card for five seasons. This season, he was struggling due to injuries.

The Ladies Professional Golf Association (LPGA) Tour, too, announced on Thursday it will be postponing three tournaments scheduled to start next week — the Volvik Founders Cup in Phoenix, Arizona; the Kia Classic in Carlsbad, California; and the ANA Inspiration in Rancho Mirage, California.

The postponements mean players are getting an even longer break because prior to the announcements, the Tour also canceled the Asian Swing. Since the ISPS Handa Australian Open ended on Feb. 16, no LPGA tournaments have been played.

“This is a difficult situation, and as we navigate these uncertain times, we appreciate the support of all those involved with the LPGA,” LPGA Commissioner Mike Whan was quoted as saying on the website. “I am fully committed to rescheduling these important events on our 2020 schedule, especially our first major, the ANA Inspiration.”

As of the most recent announcement, the LPGA Tour is expected to return for the Lotte Championship, which is scheduled to kick off from April 15 to 18 at the Ko Olina Golf Club in Hawaii.

Golf is just one of many sports that the coronavirus is taking a toll on.

On Wednesday the NBA postponed its season when it was reported that a player from the Utah Jazz tested positive for the virus.

Then, on Thursday, the MLB announced the cancelation of all spring training games and postponement of the regular season. The MLB was scheduled to start their 2020 season on March 26; however, they announced that they are expecting to delay the season by at least two weeks. According to its website, such decision was made after a call with all 30 clubs in the league and consultation with the MLB Player Association.

“Nothing is more important to us than the health and safety of our players, employees and fans,” the lead said in their announcement. “MLB will continue to undertake the precautions and best practices recommended by public health experts.”

This is the first time since 1995 that the MLB season has been postponed.

Over in Europe, Italy’s Serie A was suspended, after the Italian government on Monday, March 9, announced the suspension of all sporting events. Suspension may have been the right decision as Juventus’ Daniele Rugani tested positive for coronavirus. The English Premier League, too, had to postpone some of the matches after Arsenal manager Mikel Arteta tested positive.