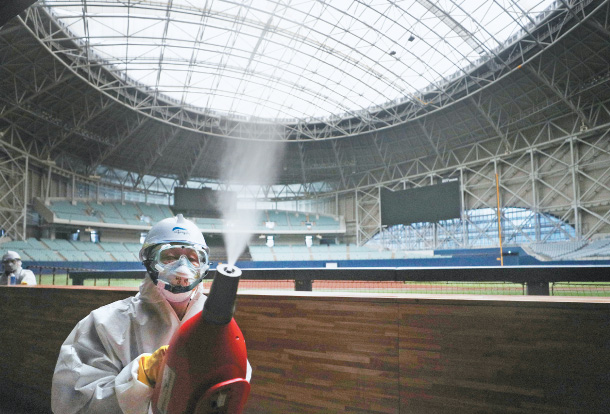 Workers from the Seoul Facilities Corporation disinfect Gocheok Sky Dome in western Seoul Monday. After a player of the Goyang Heroes, a Futures League affiliate of the Kiwoom Heroes, underwent testing for the coronavirus, the Heroes canceled practice. See story on Page 7. [NEWS1]

A Korean minor league baseball player is awaiting the results of his test for the novel coronavirus after reporting to Monday’s practice with a fever.

The Kiwoom Heroes of the KBO said Monday one player with their Futures League affiliate, Goyang Heroes, had a fever of 38.3 degrees Celsius (100.9 degrees Fahrenheit) when he was checked before entering the team’s practice facility in Goyang, Gyeonggi, just west of Seoul. The player, whose identity is being withheld, was immediately tested at a nearby drive-through station.

If the player tests positive, he’d be the first confirmed case in Korean professional sports. His results were expected as early as yesterday evening.

Practices for both the KBO and the minor league teams were immediately canceled. A Kiwoom official said players were all sent home to isolate themselves, and the clubs won’t return to the field until the ill player is notified of his test results.

Kiwoom, based in Seoul, were scheduled to play in an intrasquad game at Gocheok Sky Dome in the western Seoul Monday. The KBO and the Futures League affiliate both worked out at the Goyang practice field Friday and Saturday, albeit at different hours.

The minor leaguer forced another KBO club to suspend its practices indefinitely. The Doosan Bears said their minor league team shared the same Asiana chartered flight with the Kiwoom and Goyang Heroes on their way back from Taiwan last Tuesday, with Goyang’s ill player aboard. And some Doosan minor leaguers have come in contact with Doosan’s KBO players during their recent practices.

The Bears have been working out at their home stadium in Seoul, Jamsil Stadium, since last week.

To help stop the spread of the virus, the KBO has canceled its entire preseason and delayed the start of the regular season indefinitely. The 2020 season was supposed to begin March 28, and the league is now hoping to start by mid-April at the latest and play the full 144-game schedule.

The minor leaguer’s status could throw an unexpected wrench into that plan.

Most KBO teams have returned home from their overseas spring training.