Shin Min-hyeok ready to make a mark on the mound

Shin Min-hyeok ready to make a mark on the mound

NC Dinos’ right handed pitcher Shin Min-hyeok hasn’t made a single appearance on the mound in a KBO game, but this year, he’s hoping that will all change. 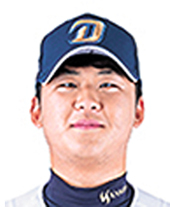 Throughout the Dinos’ spring training, manager Lee Dong-wook has been finalizing his starting rotation for the 2020 season. The rotation is expected to be led by two foreign pitchers - Mike Wright and Drew Rucinski - followed by Koo Chang-mo and Lee Jae-hak. But it’s the last starter Lee Dong-wook hasn’t selected yet and currently, three Dinos pitchers are competing for that spot, including Shin.

“Kim Young-kyu, Choi Sung-young and Shin Min-hyeok are the candidates,” Lee said. “I was going to choose our fifth starter by watching them through exhibition games, but since they got canceled [due to the coronavirus], I’ll make my decision based on our intrasquad games.”

Shin was drafted by the Dinos in 2018, but this year was the first time that he got to join the team’s spring training. Many of the players - who didn’t have any experience in the KBO - were sent back home in the middle of spring training, but Shin successfully managed to get through the entire program in Tucson, Arizona.

He also set some expectations during two tune-up games, where he tossed three scoreless innings while striking out two and giving up two hits. Although it wasn’t that many innings, it was good enough for coaching staff to see potential from the young pitcher. In terms of physical strength, Shin still has some ways to go, as he said he feels tired once the number of pitches exceeds 60. But he’s determined to compete for that last spot against Kim and Choi, who both have experience in KBO games, and prove his potential.

Below are edited excerpts of Shin’s interview with Ilgan Sports.

Q. This was your first time spending your pre-season at the Dinos’ spring training. How did you feel?

A. Compared to the end of the year training, the atmosphere was different and there was a lot for me to learn. I could see that all the players are working really hard to prepare for the season. It also seemed like there was some unseen competition. To not fall behind, I did some shadow pitching with [pitcher Jang] Hyun-sik at night, separate from team training.

You are considered one of the candidates for the Dinos’ fifth starter in the rotation. What did you focus on during spring training?

Control and game management. To be more accurate, I’ve been trying to make the ball count to be in my favor. If it’s not in my favor, I felt that it’s harder [to compete against batters]. When I was first told that I was one of the candidates for fifth starter, I was thankful, but at the same time, felt a little lost. However, as time passed, I started to think, “I can do well.”

You had a Tommy John surgery in November 2017 and it took you quite some time until you got to return to the mound. What happened?

Right after the surgery, my arm was in good condition. But in November 2018, when I was rehabilitating in Jinhae [South Gyeongsang], I felt pain in my elbow, where I had my surgery. Following that, trainers suggested that I try to control [the pitches] and rehabilitate. I think I took about a year and a half. On April 10 last year, I made my return by playing from the bullpen during a Futures League game, and at the end of April that month I made my appearance as a starter. At the time, our coaching staff suggested, “Let’s try as a starter. You need to throw about 50 pitches and let’s set our goal to increasing that number by 10 every week.” That’s how they gave me a chance and I got to be a starter.

Now that you look back, how was your rehabilitation process?

The hardest thing was the psychological state of my mind. But I was able to get through it because a lot of our senior players, who I was rehabilitating with, gave me good advice.

There were times where I felt pain in my elbow so I was in a bad mood, but they encouraged me by saying how they all went through that process and that I’ll get through it all. It reminded me not to get injured again. So now, whatever I do, I’m trying to be careful.

Which areas are you trying to be careful in?

Instead of overdoing it, I spend more time warming up. I work on a lot of strength training and take a lot of vitamins and other things that make me healthy.

Your teammate, pitcher Kim Young-kyu, was drafted by the Dinos in the same year as you were. Last season, he played well by picking up five wins and four losses with a 5.29 ERA. While he made his debut, you couldn’t. Were you ever frustrated by that, or did that motivate you?

Rather than motivate me, I had thoughts like “I want to return as quickly as possible and pitch like Young-kyu.” Whenever we talked to each other on the phone, he encouraged me by telling me to make a quick recovery and play together.

When I was little, it was the [former national team] manager Sun Dong-yol. My dad is a fan of Kia, so he showed me clips [of Sun pitching] and he was really good. But from middle to high school, it’s been [my teammate] Jang Hyun-sik. In 2017, I watched him pitch as a starter and his wild pitching form looked really cool. Now I’m trying to learn a lot from Hyun-sik and beat him.

If you had to choose one, which breaking ball do you feel the most confident throwing?

I throw curve, change-up and sliders - but of all, I feel the most confident in change-up. Rather than sliders, I toss curves more. When I pitch against left-handed batters, I first throw a fastball to show my power and mix it up with change-ups. Against right handed batters, it’s mostly between fastball and sliders, but it doesn’t really work. So I’m trying to make some changes.

I want to become a player who can be a help to the team. After that, I want to play one healthy season, without getting injured. Although my position has not been assigned yet, if I become a starter, I want to pick up more than 10 wins. But if I get assigned as a reliever, then my goal is to play in 30 games or more. I’ll try my best.