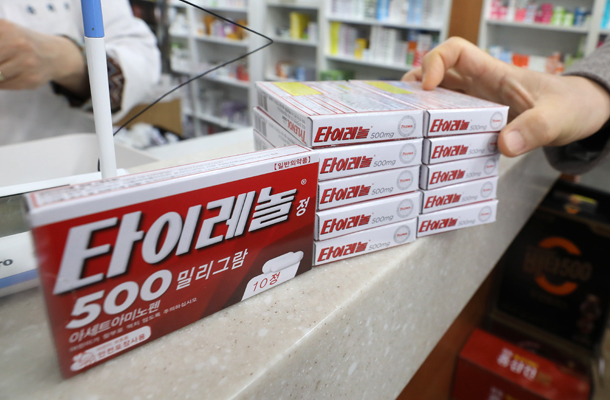 A pharmacy in Seoul on Thursday sells Tylenol after the World Health Organization recommended using paracetamol and not ibuprofen for the coronavirus. [NEWS1]

The Korea Centers for Disease Control and Prevention (KCDC) said Thursday morning that 152 cases were tallied Wednesday, of which 97 were from Daegu, 18 from Gyeonggi and 12 each from Seoul and North Gyeongsang. 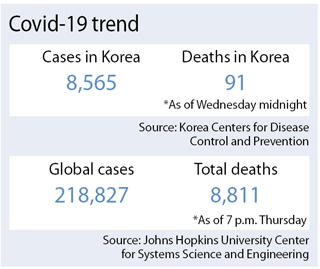 Most of Daegu’s latest infections were traced to Hansarang Care Hospital in Seo District, where a new cluster was discovered Wednesday, as well as other nursing homes and hospitals for the elderly. Daegu officials have been checking a list of some 390 places with dense populations of senior citizens, where infection clusters were likely.

At least 96 infected patients have been detected through that process this week, of which 75 were from Hansarang Care Hospital.

Daegu Mayor Kwon Young-jin said Thursday morning in a press briefing that the city has so far finished testing 20,448 people out of 33,628 in such facilities, about 61 percent, hinting more infections were likely to be uncovered.

After nearly three weeks of three-digit daily increases, mostly in Daegu and the surrounding province of North Gyeongsang in the nation’s southeastern region, Korea had seen its daily new infections drop to two-digit figures last Saturday through Tuesday.

On Monday, for the first time since infections spiked in Daegu and North Gyeongsang on Feb. 19, the combined number of infections for the Seoul capital region - which includes Seoul, the surrounding province of Gyeonggi and the neighboring city of Incheon - was higher than that of Daegu and North Gyeongsang after a new cluster was discovered at a church in Seongnam, Gyeonggi, just south of Seoul.

But as new cases linked to the Seongnam church now fall and Daegu officials take proactive measures to find undetected coronavirus patients, cases in Daegu are expected to outnumber the capital region again for some time unless a new cluster arises in the Seoul area.

Prime Minister Chung Sye-kyun warned against such clusters Thursday morning during a meeting of the Central Disaster and Safety Countermeasures Headquarters, the Korean government’s core task force fighting the coronavirus, which he heads.

“There are many seniors and people with underlying conditions at nursing homes, so we must keep vigilant,” Chung said. “Relevant ministries and local government offices must carry all-out investigations on such vulnerable facilities, and even though some local government offices like North Gyeongsang are taking prophylactic cohort measures, they, too, must reinvestigate whether they missed any blind spots.”

Daegu officials said Thursday morning that all 75 people at Hansarang Care Hospital who tested positive have been transferred to state-designated hospitals for coronavirus treatment or, if their symptoms were not severe, to facilities for isolated treatment.

A total of 57 out of 117 patients at the hospital contracted the disease, and so did 18 out of 71 medical workers. Those who tested negative are currently inside the hospital building under cohort isolation, the shutting down of an entire building or institution to prevent the spread of a contagious disease.

The second-largest cluster in the Seoul capital area grew to 66 cases Thursday, up from 61 the day before, as health officials track down people who members of the River of Grace Community Church in Seongnam had contact with. Of that total, 54 are members of the small Protestant church.

The largest cluster in the capital area, at an insurance call center in Sindorim-dong, Guro District in western Seoul, also grew Thursday, bringing total cases to 139. Most are employees of the call center in the 19-story Korea Building while the rest are workers at other companies in the same building or people who had contact with them.

How the virus got into the Sindorim call center or Daegu nursing hospital is yet unknown.

In regard to the Seongnam church, health officials believe a faulty preventive measure practiced by the pastor’s wife helped spread the virus. CCTV footage showed her spraying saltwater into members’ mouths and on their hands, claiming the liquid was meant to disinfect them, before Sunday services on March 1 and 8. Officials think an infected patient came into contact with the spraying device.

As Korea’s central government tries to curb the economic fallout from the coronavirus outbreak, local governments are vowing to take matters into their own hands by doling out so-called disaster basic funds worth hundreds of thousands of won to low-income households in their constituencies.

South Gyeongsang Gov. Kim Kyoung-soo said Thursday morning in a press briefing that his office was considering offering as much as 500,000 won ($391) to the province’s low-income bracket, especially small business owners and the self-employed. The governor reiterated his earlier proposition to the central government to provide 1 million won to every Korean citizen in the nation, which had elicited a lukewarm response.

The office of North Chungcheong likewise relayed plans Thursday to consider offering similar subsidies to its residents, saying the provincial government was examining the issue from “various perspectives.”

At least three local government offices - Seoul, the city of Jeonju in North Jeolla and the province of Gangwon - have rolled out specific plans to offer subsidies between 300,000 won to some 500,000 won.

The Agence France-Presse, meanwhile, reported that World Health Organization spokesman Christian Lindmeier told reporters in Geneva on Tuesday that the health body recommends “using rather paracetamol, and do not use ibuprofen as a self-medication” for the coronavirus. “That’s important,” he stressed.

Trade names of paracetamol include Tylenol.

Lindmeier was responding to questions about a recent study in The Lancet medical journal that suggests anti-inflammatory drugs such as ibuprofen could worsen coronavirus infections.

But in the same breath, the spokesman added that if ibuprofen had been “prescribed by the health care professionals, then, of course, that’s up to them.”