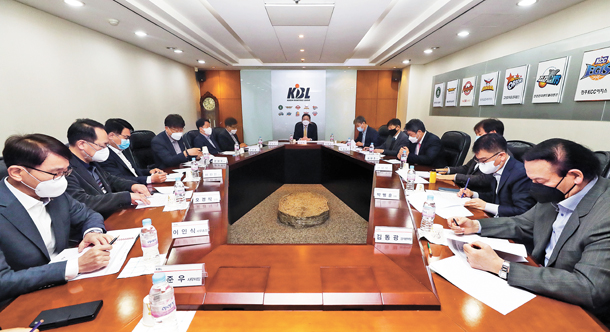 The commissioner of the Korean Basketball League (KBL) Lee Jung-dae, center, holds a board meeting with the teams’ representatives at the KBL Center in Seoul on Tuesday. [YONHAP]

For the first time in the Korean Basketball League (KBL) history, the season has been canceled.

Following a board meeting Tuesday, the KBL decided to end the season by canceling the remaining matches and the playoffs due to the ongoing outbreak of coronavirus. The 2019-20 regular season ranking has been decided as of Tuesday, with the Wonju Dongbu Promy and the Seoul SK Knights finishing tied at the top with 28 wins and 15 losses, followed by the Anyang KGC in third with 26 wins and 17 losses.

Each season, the KBL teams play 54 matches. The teams had about 11 to 12 matches remaining in the regular season.

Such a decision comes as quite the disappointment, especially to the top two teams as they had to share the regular season title. The cancelation of all playoff games will also deal a blow to the KBL. This is the first time in KBL’s history, since it was established in 1997, that they’ve encountered such a situation.

The Women’s Korean Basketball League (WKBL) was the first league in Korea to reach a decision about what to do amid the coronavirus outbreak and announced last Friday that it would end its season early. With the announcement, the Woori Bank Wibee took the regular season title, a bittersweet victory as they were just one win away from taking the title anyway.

Right after the WKBL’s decision, the Korean Volleyball Federation (KOVO) announced on Monday it was canceling all remaining matches in the regular season in the men’s and women’s leagues. For KOVO, too, it marked the first time for the league to play an incomplete season since it was established in 2004.

The KBO held a meeting Tuesday about when to start the season which was scheduled to begin at the end of March.

The season, which was originally scheduled to kick off this Saturday, will not start any time before April 20, marking the second delay as the KBO previously said they hoped to start the season by mid-April, at the latest.

Since the government implemented social distancing measures until April 5, the KBO said they’ve decided to follow along with those as their priority is the safety of the players and the fans. But the clubs had one piece of good news: The KBO will allow them to play practice games starting from April 7.

Although the games will be played at empty stadiums, the KBO said they plan on broadcasting the games so the fans don’t have to wait until the season finally kicks off.

“Once our season gets under way, we’ll explore ways that we can give back to our community and offer hope and inspiration for people in these difficult times,” said the KBO secretary general Ryu Dae-hwan.

As of Tuesday, the Doosan Bears once again had to cancel their training after the club reported that one of their players had been in secondary contact with a patient who tested positive for the coronavirus. The Bears’ players were told to self-isolate in their homes until the test result of the player is revealed. Following the Bears, the Kia Tigers also had to cancel their practice after one of their players showed symptoms of the coronavirus.

The KBO hasn’t seen any of its players test positive for the virus, yet. The KBO holds meetings with the presidents of the 10 clubs every Tuesday. Currently, the clubs are preparing for the season by playing intrasquad games.

The K League, which also postponed the start of its season, hasn’t made any announcement regarding a starting date.