Telegram trafficker calls himself a ‘devil’

Telegram trafficker calls himself a ‘devil’ 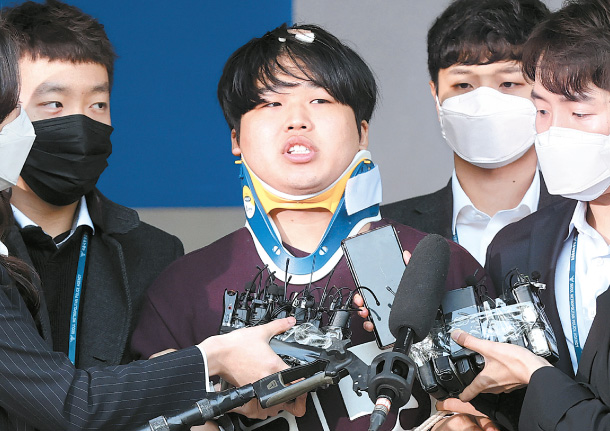 Cho Ju-bin, center, a suspected leader of a pornography ring that enslaved dozens of females, including children, faces reporters at the Jongno Police Precinct in central Seoul on Wednesday before being handed over to the prosecution. [YONHAP]

The suspected leader of a pornography ring that enslaved dozens of women, including children, faced the media at a Seoul police station Wednesday and said, “Thank you for stopping my unstoppable life as a devil.”

Before handing him over to the prosecution around 8 a.m. Wednesday, officers from the Jongno Police Precinct in central Seoul allowed Cho Ju-bin, 25, to answer questions from the media.

Cho was arrested March 16 after a seven-month investigation into a series of chat rooms operated on the Telegram instant messaging app that offered videos of trafficked women and girls having sex and being raped.

His name in the chat rooms was “Baksa,” meaning doctor or guru in Korean.

Cho is accused of sex trafficking at least 74 victims, including 16 children and teens, producing illegal pornographic materials and distributing them for profit through the Telegram app from December 2018 through March.

A bandage was visible on Cho’s head Wednesday. Police said he tried to injure himself by hitting his head on a wall when he was in a bathroom.

He was also wearing a neck brace. It was not clear if it was being used to treat an injury or whether the police wanted the suspect’s face to be fully visible to the media. While the police and reporters wore face masks to avoid new coronavirus infections, Cho was not wearing one.

“I offer sincere apologies to all the people who I have damaged including President Sohn Suk-hee [of JTBC], [former Gwangju] Mayor Yoon Jang-hyun and [former] reporter Kim Woong,” Cho said, when reporters asked if he had anything to say to his victims.

“Thank you for stopping my unstoppable life as a devil,” he added.

An official of the Seoul Metropolitan Police Agency said it is investigating whether the three men have connections to Cho. He did not offer any specific apology to the women he allegedly kept in sexual slavery. Cho also remained tight-lipped when asked if he committed crimes or regretted them. His face showed no emotion as he faced the cameras.

The Seoul Metropolitan Police Agency made the rare decision on Tuesday to disclose Cho’s full name and age and to release his picture. About 100 reporters and photojournalists came to the Jongno Police Precinct on Wednesday to see the real person. Crowds also gathered outside the station.

“It seems that he wants to shift his guilty conscience to Sohn and others,” said Professor Lee Soo-jung of Kyonggi University, a renowned forensic psychologist and one of the country’s top criminal profilers. “He may also suffer from megalomania.”

“But he must apologize to the victims,” Lee added.

While Cho did not elaborate on why he was apologizing to Sohn, Kim and Yoon, an official of the Seoul Metropolitan Police Agency said an investigation is ongoing over any possible connections to Cho. “All of them are fraud victims,” the source said. “But it doesn’t involve child pornography, drugs or guns.”

Later in the afternoon, JTBC issued a statement to explain its president’s connection to the suspect. JTBC is an affiliate of the Korea JoongAng Daily and the TV channel of JoongAng Group.

“Cho approached President Sohn through Telegram, pretending that he was a head of a private investigation agency,” JTBC said. “Cho lied to Sohn saying Kim had approached him to hire a man to hurt Sohn and his family. Cho, then, presented Telegram texts fabricated to look as if he had such conversations with Kim.”

According to JTBC, Cho claimed that Kim had already paid him money to hire a hit man. “Because the Telegram messages were meticulously fabricated, even the police believed they were real,” JTBC said.

Sohn and his family have received numerous threats since the network’s exclusive reports in 2016 that triggered the impeachment of President Park Geun-hye.

JTBC said Sohn demanded proof from Cho that Kim had actually paid the money for a hit man, and Cho demanded that Sohn pay him to see the transaction record. “To secure the evidence, Sohn had no choice but to pay Cho,” JTBC said. “But Cho did not send the evidence and disappeared.”

Sohn only learned the real identity of the man who pretended to be a private investigation agency owner after the police captured Cho and conducted an investigation, JTBC said.

The broadcaster said it understands and supports the position of Sohn and his family.

Meanwhile, the Korean National Police Agency launched Wednesday a special crackdown on cyberspace sex crimes, two days after President Moon Jae-in urged such action. The team will be operated until the end of this year and go after operators of illegal pornography businesses and their clients.

The Seoul Central District Prosecutors’ Office also launched a special investigation team on Wednesday. The task force will be headed by Yoo Hyeon-jeong, head of the department in charge of crimes against women and children. She will also be the lead prosecutor in the case against Cho and his accomplices.

Through months of investigations, the police arrested Cho and 13 others for allegedly operating the pornography ring. Among the suspects was a 30-year-old civil servant in the Geoje City Government in South Gyeongsang. The official was questioned by the Seoul Metropolitan Police Agency in January and then arrested. The Geoje City Government said Wednesday that it dismissed him immediately after the police notified it about the arrest but did not know that he was an accomplice of Cho.

The police said Cho had recruited clients as his employees. They were ordered to participate in rapes, launder money, distribute illegal videos and operate chat rooms. The civil servant worked for Cho to attract more clients, the police said.

“My son told us that he was just a member [of the chat rooms] and joined the ring to rescue the victims,” a parent of the civil servant told the JoongAng Ilbo on Wednesday. “He was such a great boy, and I cannot believe he was involved in this.”

Another accomplice was doing his compulsory military duty at a district office. He offered personal information about victims to help Cho blackmail them into sexual slavery.