In the National Assembly in Yeouido, western Seoul, on Thursday, leaders of the Democratic Party bow to express gratitude to voters for the landslide victory in the general elections. [NEWS1]

The ruling Democratic Party (DP) of President Moon Jae-in won a landslide in Wednesday’s general elections, securing a solid majority in the 300-member National Assembly with a satellite party.

The DP and Citizen Party (CP) won 180 seats, the first time since Korea introduced its current political system in 1987 that any single political group has won three-fifths of the legislature - enough to pass any bills other than a constitutional amendment.

According to the National Election Commission, ballot counting ended around 10 a.m. on Thursday. Voters elected 253 lawmakers for constituencies and 47 proportional representatives by voting for political parties on a separate ballot.

The DP won 163 seats in the district elections, and the UFP won 84. The Justice Party won one seat, and independent candidates won five.

While the two major parties did not field proportional lawmaker candidates, their two satellite parties did and won a majority of the votes.

The DP-CP alliance controls 180 seats, and its power could grow if it cooperates with other liberal parties. The Justice Party, which won six seats in total, is a longtime ally of the DP, and the Open Minjoo Party, which won three proportional lawmakers, is composed of former DP members. 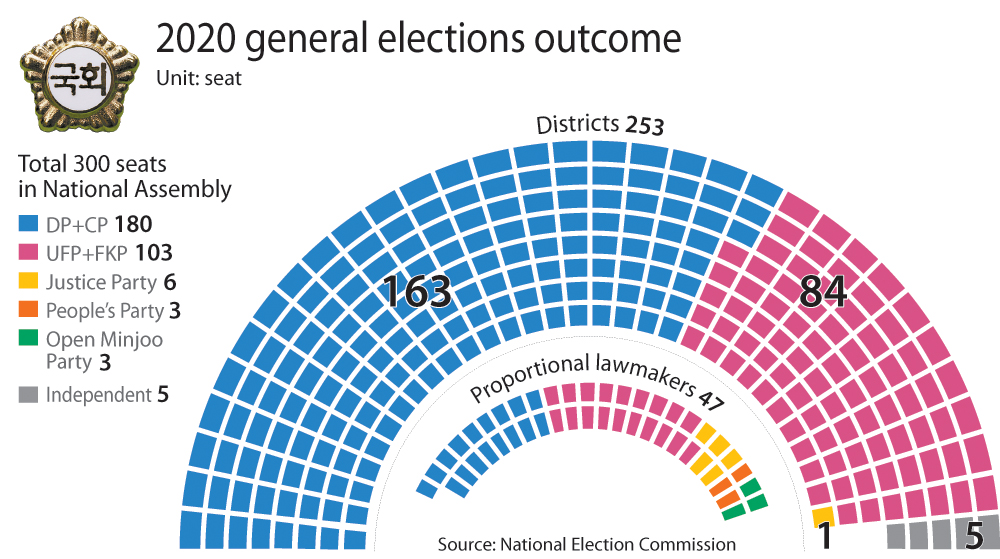 Four out of the five independent winners are conservative heavyweights who failed to be given nominations to run for the UFP, such as former presidential candidate Hong Joon-pyo.

After the DP’s landslide became certain, UFP Chairman Hwang Kyo-ahn accepted responsibility and resigned. The defeat effectively put an end to the political career of Hwang, a former prime minister in the Park Geun-hye administration, and any hope he had of running for president.

Turnout for Wednesday’s elections was 66.2 percent, the highest in 28 years.

The landslide Wednesday was the ruling party’s fourth straight national election victory. Since it scored a narrow victory in 2016 general elections, the DP won the 2017 presidential election and 2018 local elections. Moon’s grip on power will remain strong in the second half of his term, and the administration’s key goals such as a campaign to reform the criminal justice system by weakening the prosecution’s power are expected to gain momentum.

Korea’s political tradition of a two-party system based on regionalism, class and ideology was maintained in the latest elections. The two-party system was briefly disrupted in 2016 when the public showed unexpectedly strong support for a third party - Ahn Cheol-soo’s People’s Party.

At the time, the DP won 123 seats in the legislature, and the Saenuri Party, the predecessor of the UFP, won 122. The People’s Party won 38.

On Wednesday, Ahn’s party did not field any district candidates although it won three proportional seats.

Regionalism also came back as a political force. The UFP won an overwhelming victory in its traditional stronghold, the Gyeongsang region, while the DP scored a landslide in the Jeolla region.

In the capital region of Seoul, Incheon and Gyeonggi, where populations are concentrated and the vote can swing from election to election, the DP won most districts.

Of 253 districts, 121 are located in the capital region, and the DP won 103. Seoul has 49 districts, and the DP lost only eight districts in Gangnam, Seocho, Songpa and Yongsan, where voters from the wealthy class mainly reside.

The UFP managed to win almost all of the seats in the conservative Daegu-North Gyeongsang region: 24 out of 25 districts. One seat in Daegu was won by former presidential candidate Hong Joon-pyo, who ran as an independent.

In Daejeon and the Chungcheong provinces, the DP won 18 out of 26 seats. In Gangwon, the DP won three out of eight.

In the Gwangju-Jeolla region, the DP managed to score 27 out of 28 seats. In the 2016 election, Ahn’s People’s Party took 25 out of the 28 districts. One non-DP winner was Lee Yong-ho, an independent who won the district of Namwon-Imsil-Sunchang. He, however, promised to join the DP after his victory.

“As I see the outcome, I feel more responsibility than the joy of victory,” DP Chairman Lee Hae-chan said Thursday morning. Lee promised that the new National Assembly will be different from past legislatures marred by scandals. “We will overcome the coronavirus outbreak and pre-emptively and aggressively counter the economic crisis,” Lee said. “We will work humbly and faithfully to serve the people.”

Lee said the DP will do its best to complete legislative goals before the current legislature ends. “The extraordinary session starts today, and the supplementary budget bill must be passed quickly to pay emergency disaster relief to the people as promised,” he said.

Among the party’s Supreme Council members, only Cho Kyoung-tae won the election. “It is impossible to elect a new chairman now,” Cho told the JoongAng Ilbo. “We will probably have to run the party with emergency leadership for months.”