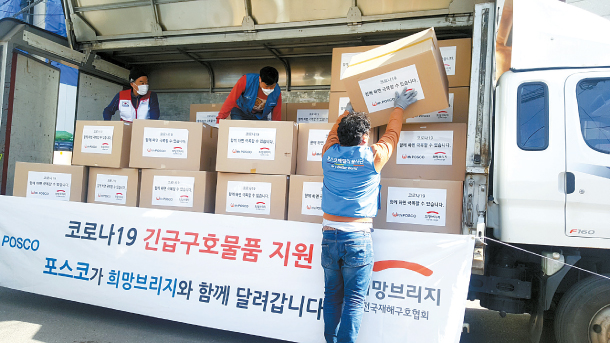 The photo shows Posco’s kits being delivered to medical faculties in Daegu to help deal with the outbreak of the coronavirus. [POSCO]

Posco, Korea’s largest steelmaker, is practicing its management philosophy “Corporate Citizenship: Building a Better Future Together” both globally and domestically.

Posco donated 6 million yuan ($847,000) worth of relief supplies to Wuhan, China, in January to help stop the spread of the coronavirus. Masks and sanitizers were delivered to locals who were unable to get the essential supplies.

Posco America, one of the subsidiaries of Posco, has donated devices to Veteran Affairs Medical Centers which enables patients to communicate with their families through video. This system was proposed by Posco America after learning about the difficulties elderly patients were encountering due to the lack of contact they could have with their families. The company donated eight devices in total, the money for which came from the 1% Sharing Fund - a fund which employees donate 1 percent of their salary voluntarily to help people in need.

In addition, Posco plans to continue its support of veterans of the Korean War which includes awarding appreciation plaques to commemorate the 70th anniversary of the war.

Posco is also working to contribute to the local community in Korea.

Posco donated 2,000 kits that included hygiene products such as masks, hand sanitizers and health supplements, to medical faculties in Daegu. The kits were delivered to hospitals through the Hope Bridge Korea Disaster Relief Association and received many positive responses from medical staff.

Also, Posco decided to donate 5 billion won ($4 million) to help prevent the further spread of the virus in Korea in February. Of the 5 billion won, 4 billion came from Posco Group while the remainder came from Posco International, Posco E&C, Posco Chemical, Posco Energy and Posco ICT. This fund will be used to provide medical supplies, daily necessities for the self-quarantined and for the prevention of the pandemic.

To lessen the burden on small business owners, Posco has also lowered the rent of 135 stores and welfare facilities in Pohang, North Gyeongsang, and Gwangyang, South Jeolla. It hopes to help small businesses which are suffering from the unprecedented crisis and eventually revitalize the local economy.

“After seeing the coronavirus threaten communities by taking people’s lives and provoking a global economic crisis, we realized corporations should pursue the values of coexistence and symbiosis,” said an official from Posco. “As a No. 1 global steelmaker, Posco will do its utmost to make the world a better place with the concept of “Corporate Citizenship.”