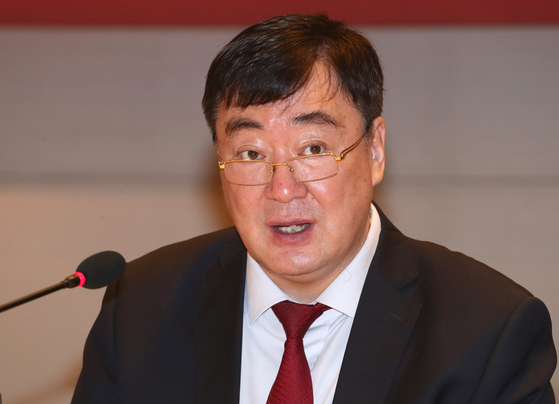 Chinese Ambassador to Seoul Xing Haiming speaks at a breakfast seminar seminar hosted by the Federation of Korean Industries in Yeouido, western Seoul, on Monday. [YONHAP]

Chinese Ambassador to Seoul Xing Haiming said Monday that Korea and China have agreed to a "fast-track" system for businesspeople to be exempted from entry restrictions put in place because of the coronavirus pandemic.

Xing made a keynote address at a breakfast seminar hosted by the Federation of Korean Industries (FKI) in Yeouido, western Seoul, and said, “Korea and China have agreed to a fast-track system, and we plan to announce the details of the agreement soon.”

China banned the entry of foreigners on March 28 to contain the coronavirus, though Beijing has been issuing limited visas for economic, trade, scientific, technological or humanitarian reasons. Amid global lockdowns and travel restrictions, Seoul has been consulting through diplomatic channels with key partner countries to enable exemptions to entry bans for Korean businesspeople.

“The fundamental content has been agreed upon, and we are fine-tuning the details,” Xing said, which may be announced as early as this week.

On Korea’s response to the Covid-19 outbreak, Xing said, “I would like to congratulate and express my respect for Korea, which has been seeing results.”

Around 20 members of the FKI and heads and representatives of Korean companies doing business in China attended the meeting, during which Xing emphasized the importance of international cooperation for post-coronavirus economic recovery. He stressed that China values Seoul-Beijing economic cooperation as being “very important.”

Kwon Tae-Shin, vice chairman and CEO of the FKI, earlier requested the ambassador for Korean companies doing business in China to receive the same financial support and tax benefits that Chinese companies get.

He said that China has granted only 108 visas since its entry ban and that “a considerable amount of these visas were granted to Koreans.”

Xing also addressed the issue of Chinese President Xi Jinping making a visit to Seoul, which he described as “a very significant matter.”

“Both Korea and China put great importance on this,” Xing said. “We will continue discussions through diplomatic channels and work toward a visit at an appropriate time.”

On Monday, Xing held talks with Kim Gunn, the Korean deputy foreign minister for political affairs, at Seoul’s Ministry of Foreign Affairs and told reporters afterward that the two sides discussed the fast-track measures. He said he hoped the two sides would “agree to reach a deal quickly.”

Geng Shuang, a Chinese Foreign Ministry spokesman, said in a briefing on April 21 that China is discussing with relevant countries, including Korea, a “fast-track arrangement for urgent essential travel including for business and technical purposes.” The main aim, he said, is “to stabilize important economic and trade cooperation” and “ensure safe and smooth operation of the international industrial and supply chains” while containing the virus.

Since the coronavirus outbreak has led to entry bans, the Korean Foreign Ministry has been negotiating with key partners to enable businesspeople with health certificates clearing them of the virus to bypass strict quarantine measures. There have been case-by-case allowances for countries like Vietnam and Kuwait.

Seoul maintains its position favoring an early visit by President Xi, but Kim In-chul, the Korean Foreign Ministry spokesman, said in a briefing Tuesday, “The world is facing a pandemic over the Covid-19 situation, so both sides are watching the situation and consulting on the detailed timing of the visit.”

Xi’s visit to Seoul has been anticipated since President Moon Jae-in met him in Beijing last December. Such as visit would signify a normalization of Seoul-Beijing relations following the economic fallout from the deployment of the U.S.-led Terminal High Altitude Air Defense antimissile system in Korea in 2016, which resulted in huge backlash by China.