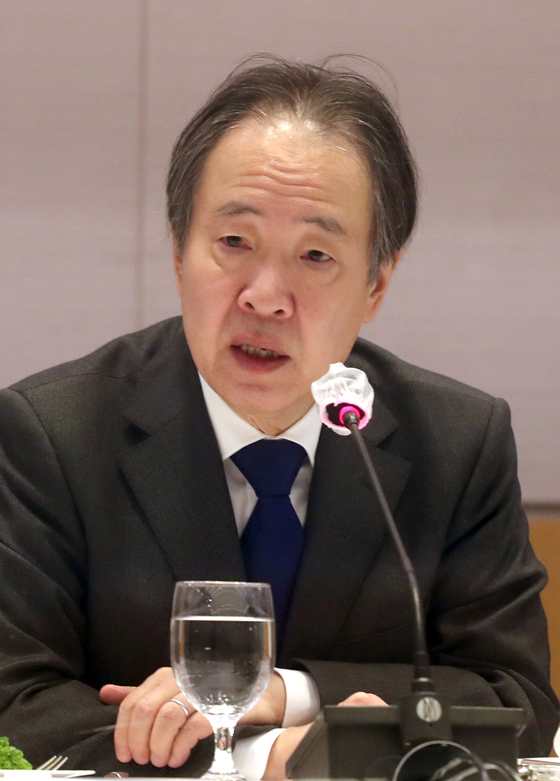 Japan's Ambassador to Korea Koji Tomita delivers a speech during a meeting with Korean business executives at Yeouido, western Seoul, on Thursday. [YONHAP]


Japan's ambassador to Seoul suggested that Korea pave the way for the two countries to rekindle talks in a meeting with Korean business executives.

The comments came during a Thursday meeting between Ambassador Koji Tomita and Korean businessmen hosted by the Federation of Korean Industries (FKI), a lobbying group for big businesses.

“Discussions were seeing progress until Korea filed a complaint to the World Trade Organization [WTO] this summer — this halted dialogue [altogether],” Tomita said.

“It’s unfortunate that all other discussions aimed at resolving the matter came to a standstill as the two stopped conversing. Japan’s official stance and my personal anticipation is that Korea would lay out the circumstances for solving the problem via talks.”

In September 2019, the Korean government filed a WTO complaint about Japan's restrictions on exports to Korea, but halted it two months later. Last June, the Ministry of Trade, Industry and Energy restarted the procedure, saying talks between the two countries had seen little progress.

The FKI is urging that Korea-Japan trade relations be normalized for the sake of both countries' economies.

One positive indicator was an agreement between Korea and Japan to grant fast-track visas for businessmen traveling between the two countries, which started implementation in early October. The countries are waiving the mandatory quarantine period for visiting foreigners.

“Hoping for an immediate recovery would be wishful thinking. But a meeting between the two countries’ leaders could result in a breakthrough,” Kwon said.

Tomita said both governments would need to undergo preparations of their own as relations between the two companies involve a list of unresolved issues, including Korean forced labor during World War II.

“I believe patiently persisting with efforts to resolve the various issues could be the precondition to improving economic relations,” the ambassador said.

“Both economies have benefited from trade relations. Trade volume grew 100-fold since 1965, when diplomatic relations were normalized.”

Korea has lots of 'unicorns' and no way for them to fly: FKI