Kim Chong-in says no to taking over UFP

Kim Chong-in says no to taking over UFP 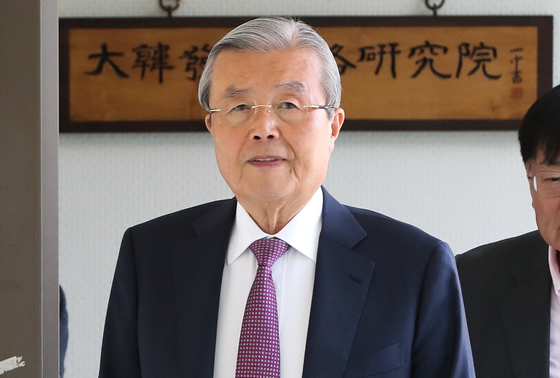 The opposition United Future Party (UFP), reeling from a crushing defeat in this month’s legislative elections, asked its former campaign chief Kim Chong-in to head an interim leadership, but Kim turned it down.


The UFP held a meeting of national delegates Tuesday afternoon and approved a plan to name Kim, a canny political strategist, as interim head of an emergency leadership. Kim rejected the offer because it was for only four months.

Since party Chairman Hwang Kyo-ahn stepped down on the night of the April 15 general elections, the UFP has been looking for a new leader to turn it around. Kim said he would take the job if he was given enough time. He said he wanted to head the UFP until March next year to prepare for the 2022 presidential election.

Kim, 79, is credited for victorious election campaigns by Korea’s two main parties, which are bitter ideological rivals. In 2012, he led the victorious campaign of President Park Geun-hye in 2012. After his fallout with Park, then-Democratic Party (DP) Chairman Moon Jae-in recruited Kim in 2016 to lead its general election campaign.

Hwang begged Kim to oversee the UFP’s campaign at the last minute, but his joining did little to stop the conservative opposition party’s crushing defeat.

While some expressed concerns about the party relying on a politician from the past, the UFP’s National Delegation, composed of Supreme Council members, incumbent lawmakers, lawmakers-elect, local government heads and local legislative council members, endorsed a plan to name Kim their interim head.

Of the 639 members of the National Delegation, 330 attended the meeting Tuesday afternoon. While 177 delegates supported Kim’s appointment, 84 opposed.

Ahead of the vote, the UFP made an unsuccessful attempt to award Kim a longer tenure. The party tried to change its constitution by holding a committee of standing delegates. Of the 45 standing members, only 17 attended, failing to meet quorum for a vote.
The constitutional change would have scrapped a clause that requires the party to hold a national convention on Aug. 31 to elect a new chairman. When the UFP was launched in February through a merger of conservative groups including the Liberty Korea Party, the clause was introduced so the next leadership election would take place by the end of August. Because the party failed to remove the clause, Kim’s tenure, if he accepted the offer, was scheduled to end on Aug. 31.

“Kim does not consider the National Delegation’s decision as an appeal to him to head the party,” said former lawmaker Choi Myung-gil, an associate of Kim.

“After hearing about the decision, Kim said it doesn’t deserve any response,” an aide to Kim told KBS.

Rep. Shim Jae-cheol, floor leader and the acting head of the UFP, said he will make an appeal to Kim. “The interim leader can change the constitution,” Shim said, stressing that Kim can remove the clause after he assumes the leadership.

“I will explain what happened today to Kim and ask him to accept our proposal,” Shim said. “I expect him to accept it.”
BY SER MYO-JA   [ser.myoja@joongang.co.kr]