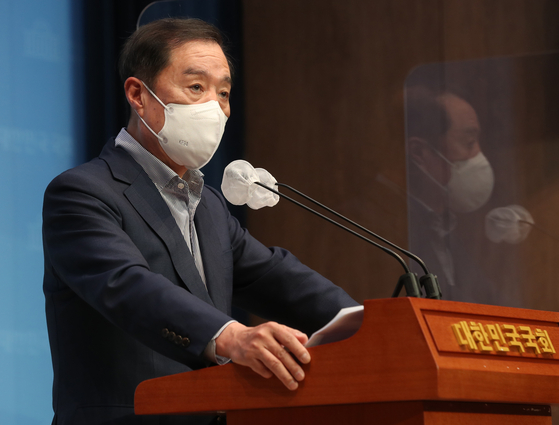 
The main opposition People Power Party's (PPP) presidential candidate Yoon Seok-youl will visit the special administrative city of Sejong with Kim Byong-joon, the recently-appointed chairman of the party's campaign headquarters, in the first regional visit since the campaign launched.

The visit to Sejong, a purpose-built city where many of Korea’s government agencies and ministries have decamped in an effort to lower the concentration of administrative power in the capital Seoul, comes after a month where most of Yoon’s efforts were focused on the formation of his campaign headquarters.

Yoon has hinted that a campaign tour of regions outside Seoul was long overdue, telling reporters on Friday that he would soon be “busy in the campaign field.”

A PPP official who spoke to the JoongAng Ilbo on the condition of anonymity characterized the visit as a natural one, given Yoon’s Chungcheong origins.

“The candidate has his roots in the Chungcheong region,” the official said, adding that Yoon will continue the visit to Sejong with campaign stops in Daejeon, the largest city in the area, and other places in North and South Chungcheong provinces.

Yoon himself highlighted his origins in the region by calling himself “a son of Chungcheong” and drawing attention to his family and relatives in the area.

“Five-hundred years of my father’s ancestors have lived in Nonsan, South Chungcheong, and I have many first cousins and second cousins in the Chungcheong area,” Yoon said.

“I believe I was able to overcome all kinds of pressure when I was prosecutor general and directed the probe into Cho Kuk because the blood of Chungcheong flows in my veins,” the candidate and former chief prosecutor said.

As prosecutor general under President Moon Jae-in, Yoon attracted the ire of the government and the ruling DP by directing an investigation into Cho — Moon’s pick for justice minister — and allegations that the nominee used his influence to get his daughter admitted into medical school through falsified academic credentials.

The scandal forced Cho to resign from his post almost immediately after he was appointed and set up a showdown between Moon’s next justice minister, Choo Mi-ae, and Yoon over the extent of the state prosecution service’s investigative powers, which ended with Yoon’s resignation in March.

Ahead of his upcoming tour of Chungcheong, Yoon also highlighted the similarities between his roots and those of former United Nations Secretary-General Ban Ki-moon and former Prime Minister Kim Jong-pil, both of whom also hail from the region and were known to harbor presidential ambitions that neither ever acted upon.

Yoon said that while both ultimately did not run for presidency, that result came down to the circumstances of the time and not their personal limitations or ideologies. However, in response to a reporter’s question if the time was ripe for a Chungcheong native to win the Blue House in the upcoming March election, Yoon said he would leave it to the people to decide.

While Yoon can count on several prominent PPP bigwigs in his Chungcheong entourage, notably absent is Kim Chong-in, the 81-year-old former leader of the PPP and of the DP, whom Yoon recently courted for support in his presidential campaign.

In the past few weeks, Yoon reached out to Kim, who has been called a political “kingmaker” between the parties, to recruit the elder politician as his campaign chief.

However, after Yoon announced that Kim would head his campaign headquarters on Tuesday, Kim asked to hold off on his appointment.

Kim’s change of heart appears to have resulted from Yoon’s selection of Kim Byong-joon and Kim Han-gil for his campaign team, neither of whom Kim Chong-in allegedly approves of.

“I am new to elections and I have always said that I do not commit to things about which I lack confidence,” Kim said Tuesday to reporters in front of his office in Gwanghwamun, central Seoul.

While Yoon previously said he respected Kim for being a man without blind partisan allegiance, he has also expressed discontent with him, telling reporters not to ask about Kim while he was on the way to an event on Tuesday.

Time for a vision (KOR)