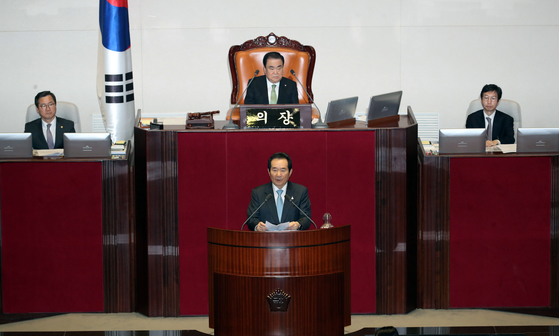 Prime Minister Chung Sye-kyun speaks to lawmakers after the second supplementary budget of 12.2 trillion won) was approved at the National Assembly on Thursday morning. [YONHAP]


It was the first time a second supplementary budget has been approved since 2003.

The extra budget will be used to pay for emergency relief grants of up to 1 million won to all Korean households in the wake of the coronavirus outbreak.

Some 2.7 million lower income households will receive the relief grant on Monday in cash, including people who lives on the government’s basic living allowances.

People who do apply will get grants in the form of vouchers, not cash.

The budget was increased from an initial government proposal of 7.6 trillion won to afford payments to all households. That proposal would have excluded the wealthiest Korean households.

New ways of financing the additional 4.6 trillion won had to be found.

The initial government plan was to fund the supplementary budget by readjusting this year’s annual spending, including downsizing or suspending several government projects rather than covering it with government bonds.

Now, the government plans to issue bonds to finance 74 percent of the additional spending, or 3.4 trillion won.

The remaining 1.2 trillion won will be financed through further cuts in spending, including 200 billion won in suspended infrastructure projects as well as 8.2 billion won is savings from government employee labor costs.

On top of the 12.2 trillion won supplementary budget, local governments will pay for 2.1 trillion won of the emergency relief grants.

Lawmakers also passed a bill that will allow the Korea Development Bank to create a 40 trillion won fund to invest in industries considered essential to the economy including automobiles, airlines and steel.

Lawmaker also passed a bill that increases tax deductions for spending on credit and debit cards.

Bills cracking down on sex-related crimes in the aftermath of the Nth room scandal passed as well.