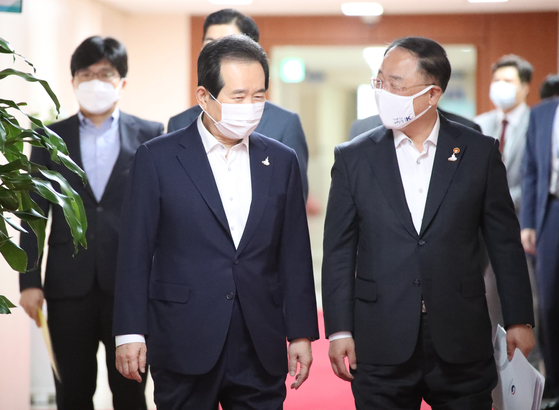 
The government vowed to quickly spend the fourth supplementary budget of 7.8 trillion won ($6.9 billion) that was approved by the National Assembly late Tuesday.

“Speed is the essence of a supplementary budget,” Prime Minister Chung Sye-kyun said on Wednesday during a cabinet meeting held to approve last-minute changes to the budget made by the legislature.

He likened the spending of the budget to the first four minutes that determine the fate of a patient who has a heart attack.

“The supplementary budget should be like the cardiopulmonary resuscitation of a patient in an emergency situation,” Chung said.

He asked government departments to make sure spending reaches people in need.

“While the supplementary budget has been created with difficulty [and financed] through debt, it is a fact that it is not enough to fully recover from the damages [inflicted by the coronavirus pandemic],” Chung said. “Yet, we will do our best so that the people will be able to enjoy a warm Chuseok and be able to use [the supplementary budget support] to rebound [from hardship].”

The government has stressed that the budget is focused on self-employed business badly affected by the resurgence of the coronavirus since mid-August.

Starting Thursday, the government will be accepting applications from self-employed businesses as well as freelancers, private tutors and door-to-door salesperson for subsidies.

This also includes room salons (hostess bars) and cola-tech joints (no-alcohol dance clubs for teenagers). Even taxi drivers will be eligible to apply for the subsidy.

Previously, private taxi drivers were eligible. Now, even those who work for taxi companies will be able to apply. If approved, each will receive 1 million won.

However, approval will depend on the length of their time on the job as well as the amount of losses they have suffered due to the pandemic.

For small businesses with annual revenues below 400 million won, the subsidy is up to 2 million won. Applications can be made online.

Some 3.4 trillion won — 44 percent of the total supplementary budget — will be used to support small businesses. That was increased from an initial proposal of 3.3 trillion won.

The government estimated that it can offer support to 2.94 self-employed people, which is roughly 87 percent of such businesses.

The government started accepting applications from freelancers and door-to-door salesmen for the up to 1.5 million won emergency employment stabilization subsidy starting Wednesday. The first payment is likely to be made today.

Some 500,000 people already received 1.5 million won subsidies from the third supplementary budget in July. They are eligible for 500,000 won more from the fourth extra budget. New applicants, which the government estimates at 200,000, will receive 1.5 million won.

The government hopes to complete distribution of the subsidies to the first group by Sept. 29.

The second will likely receive their subsidies in November.

Additionally, the government will be handing out expanded child care support.

Previously it was planning to give 200,000 won to families for each child in elementary or younger. That was expanded to include middle school kids, who will receive 150,000 won each.

As agreed between the ruling Democratic Party and the opposition People Power Party on Tuesday, a phone bill subsidy has been cut from 930 billion won to 400 billion won and will only be given to people between the ages of 16 and 34 and 65 or older.

The government estimated that 20.4 million people will benefit from the 20,000 won subsidy.

On late Tuesday, the National Assembly approved the nation’s fourth supplementary budget for this year.