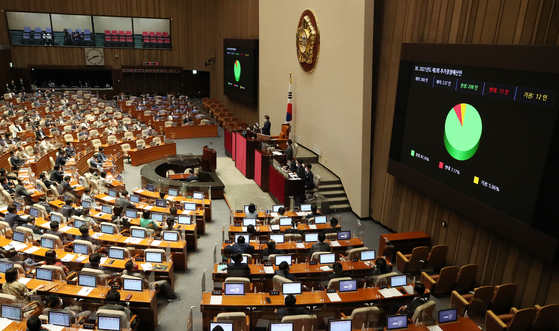 
The Covid-19 relief payments are a part of a supplementary budget passed by the National Assembly at 2 a.m. on Saturday.

In the budget, small store owners will be receiving 20 million won in support.

The payments are more generous than expected. Lawmakers has been discussing the exclusion of the top 20 percent of households from the grant program and providing small stores with 9 million won.

While the Democratic Party had been pushing for a universal relief grant of 220,000 won, the 250,000 won figure held, though the exclusion threshold was adjusted slightly from the 20 percent earning the most to the 12 percent.

Finance Minister Hong Nam-ki, who gave into every demand from the ruling party in earlier budgets, adamantly refused the money-for-all plan, while the opposition stood against payouts for everyone while emphasizing higher payments to the self-employed.

The extra budget is the second of the year and the sixth since the start of the pandemic.

With the changes, the supplementary budget will total 34.9 trillion won, up from an expected 33.0 trillion won.