A celebration of relationships over the years

A celebration of relationships over the years 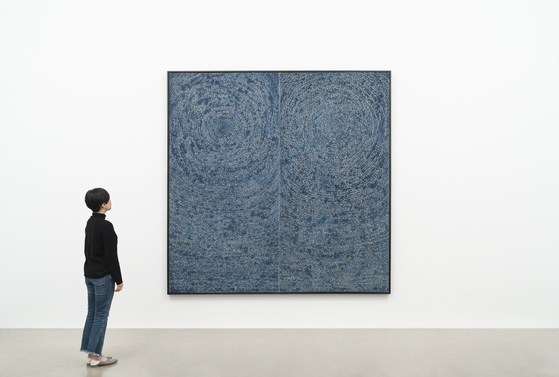 Kim Whanki’s diptych ’05-IV-71 #200 (Universe)“ (1971) will be on display at Gallery Hyundai for the first time since it was sold at a historical Christie’s Hong Kong autumn auction held last year in November, for a whopping 101 million Hong Kong dollars, or around 15.3 billion won at the time.


Fifty years have passed since Gallery Hyundai first opened its doors in April 1970, and for its golden jubilee the gallery will present what it does best ? an exhibition of modern Korean art.

Gallery Hyundai presents its special exhibition “Hyundai 50” in two parts: the first from April 17 to May 24, and the second from June 10 to July 12. Although the exhibition started last month, the gallery won’t be accepting any visitors until May 12, to abide by the social distancing guidelines outlined by the government. 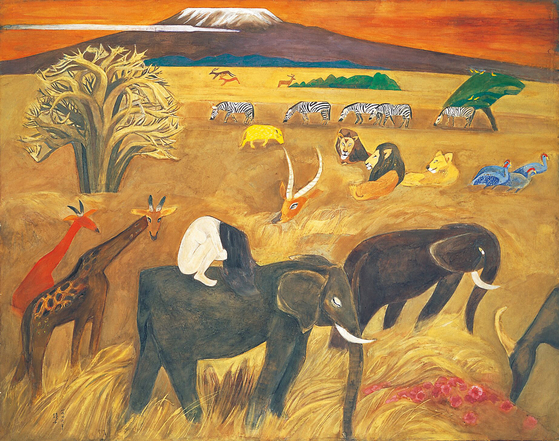 According to Do, there’s not a particular narrative or theme that the exhibition follows except the idea that “it’s up to museums and curators to do the research.” So in remembering the “relationships” between the gallery and the artists, Gallery Hyundai has chosen artists that it has exhibited before, as well as works that it has previously sold. In fact, this exhibition is all about remembering the founding goals of Gallery Hyundai as a commercial art-dealing platform.

“For this exhibition, we picked out works and artist that personally related to us,” he said.


“I was taught by my mother that, as is the same with people, our gallery and the artists developed through the relationships we shared. This exhibition is meant to continue those relationships.”

Gallery Hyundai, or Hyundai Hwarang as it was called when it first opened, initially settled in central Seoul’s Insa-dong ? a neighborhood filled with old Asian art and calligraphy as well as antique shops. Hyundai was perhaps the first gallery in Korea to deal with modern and Western art, as well as Korean art, at a time where Eastern art was the mainstream content. 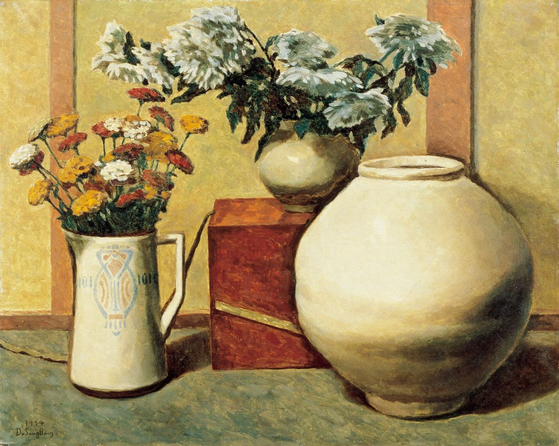 “Back in the 1960s, there wasn’t a place that we could call a gallery,” said Park Myung-ja, founder of the gallery. “People didn’t buy Western art, even by the biggest Western art masters like To Sang-bong [1902-1977], Oh Ji-ho [1906-1982] and Yoon Jung-sik [1913-2012]. It was mostly Eastern art. Before I began the gallery, I surveyed the number of artists and found that there were a lot of Western art painters ? 60 to 70 percent were Western artists and 30 to 40 percent were Eastern artists. I thought that the gallery should deal with artwork in that same proportion.”

The opening exhibition of Hyundai was of Park Soo-keun’s posthumous works. It was followed by a Kim Ki-chang (1913-2001) exhibition. 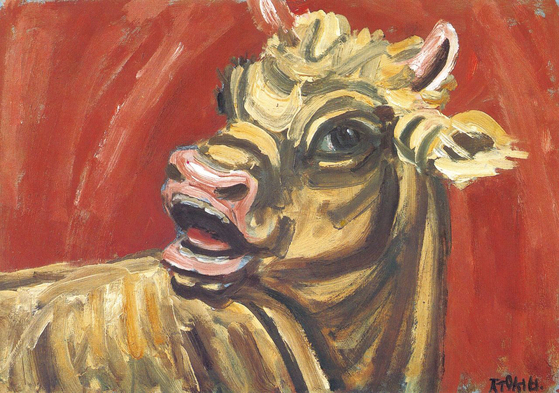 According to Park, it was in the year 1972 that the gallery began leading the art scene with a Lee Jung-seob solo exhibition. Hyundai collected the most iconic works by Lee that had been hiding across the country, such as his most famous pieces “Bull” (1953-54) and “A Seascape of Tongyeong” (1950s) ? two works that are also displayed for the 50th anniversary exhibit. Hyundai held a Lee Jung-seob exhibition again in 1999, through which the gallery garnered more than 90,000 visitors.

“People queued up for meters outside of the gallery just to see the exhibition, and we were recognized as the gallery that made Lee Jung-seob a legend,” said Park. 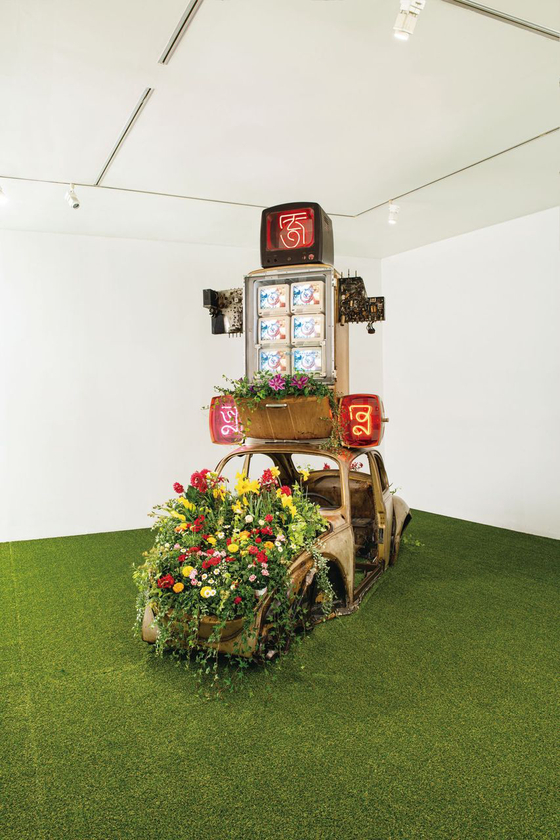 Having established a name as a pioneer, Gallery Hyundai moved to central Seoul’s Sagan-dong ? or Samcheong-dong as it is more widely known ? in 1975 and changed its name to Gallery Hyundai, completing the transition into the gallery that we know today. Afterwards, it took extra effort to support Korean artists trying to make themselves known on the international art scene. Nam June Paik, Kim Tschang-Yeul and Lee Ufan were just a few examples.

“I believed that it was the role of a gallery to connect good works with art lovers at the right time and place,” said Park. “This might not be the case now, but I think a good gallery earns its reputation by how many pieces it exhibits and displays, and how the works continue in the future. I don’t know how Gallery Hyundai will change, but I want to say that it has been such a pleasure to have tread the same path as all our artists have with this belief.” 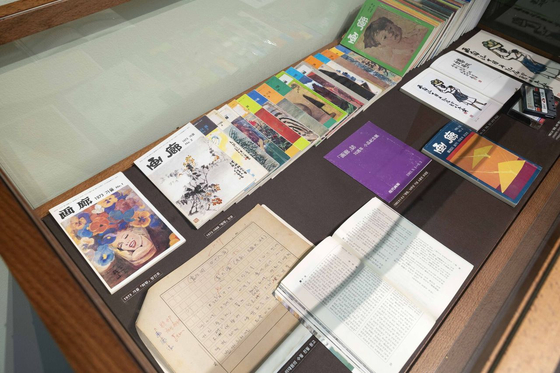 Other than the exhibition, Gallery Hyundai will reveal its archive to the public both online and offline as part of its golden jubilee. While the gallery will reveal the exhibition online to help provide an artistic experience to people during the coronavirus pandemic, it will also share the data it has built up during its past through its website, in hopes that it will be used by people who are studying Korean art.

A special book will also be published, containing behind-the-scenes stories of each work related to the gallery. Another book, led by art critic Geun-jun Lim will be published in June, with interviews of artists and art experts on the modern and contemporary Korean art world ? with a particular focus on galleries’ roles in shaping the art scene. 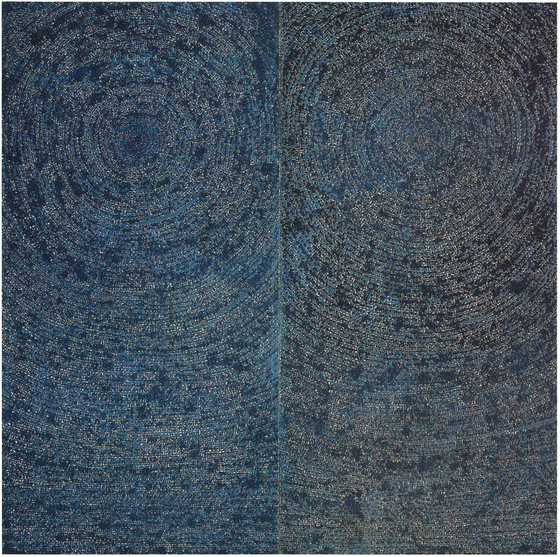 A special treat awaits visitors to the exhibition. Kim Whanki’s (1913-1974) only diptych, titled “05-IV-71 #200 (Universe)” (1971) will be on display for the first time since it was sold at a historical Christie’s Hong Kong autumn auction held last year in November, for a whopping 101 million Hong Kong dollars, or around 15.3 billion won at the time. It is the first and currently only art piece in Korea to exceed the $10 million and 10 billion won  price tag, which is considered to be a direct indicator of a country’s competitiveness in the art world.


“Just like my mother has led the past 50 years of Hyundai, I will endeavor to expand not only in Korea but outside of Korea. We’ve been getting some attention in recent days, but we will work even harder to get Korean art out into the world. I hope this exhibition shows how resolute we are,” said Do.

Owner of Korea's most expensive artwork ever sold is unmasked