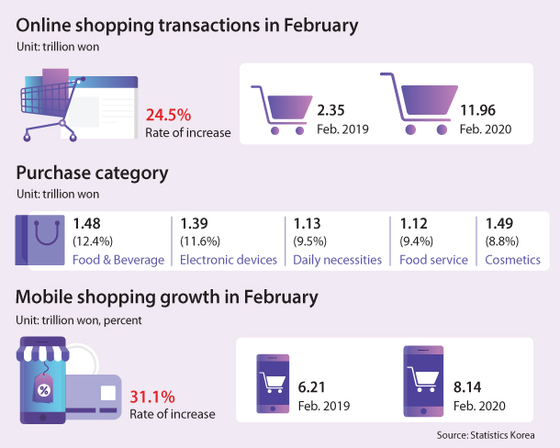 
While most businesses are struggling to recover from the impact of the coronavirus outbreak, some companies have been less affected by the pandemic. Sales of these firms ticked upwards since the virus started taking a toll on the economy. 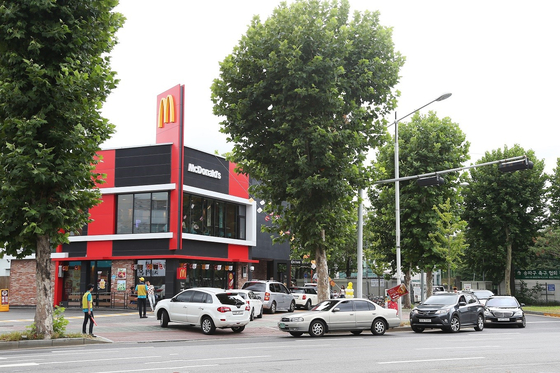 As online transactions increased, mobile payment gateways were seen as major beneficiaries of the pandemic.

According to Statistics Korea, total online transactions in February jumped 24.5 percent on year to 11.96 trillion won ($10.6 billion). Of the amount, 8.14 trillion won was for mobile shopping.

On back of the tendency to shop online, mobile payment gateways, like KG Mobilians and Danal, are projecting sales increases up to 15 percent in the first quarter compared to the same period last year, according to a report from Kyobo Securities.

Despite the decline in the purchase of tickets online, like those for flights or concerts, the growth was triggered by food sales, according to analyst Park Ji-won from Kyobo Securities.

Apart from the expansion of the online market, the growing trend to place orders at cafes or restaurants without face-to-face interactions also helped the performance of mobile payment gateways.

The number of Starbucks orders made with the company's Siren Orders jumped 20 percent in the January-March period compared to the same months last year, according to the coffee chain. The number of drive-through orders in the first quarter rose 38 percent on year.

E-commerce operators have performed well. TMON reported its first operating profit in March, while SSG.com reported 60 percent on-year growth in February and 45 percent in March. Coupang did not report results, but it hired 913 employees between February and March registered with the national pension. According to the data provided by corporate analysis site CEO Score, Coupang hired the most during that period.

Unlike e-commerce companies, home shopping operators didn’t experience much of a boost as food accounts for less than 10 percent of their portfolios.

“We didn't see a dramatic sales increase following the coronavirus outbreak because we don’t handle much food,” said Choi Young-wan, a spokesperson for CJ ENM’s O Shopping division. “Home shopping companies don’t handle much food because it offers low margins and is difficult to offer a competitive range of food products.”

Sales at snack and instant noodle manufacturers also grew significantly as people spent more time working and studying at home. Sales overseas increased as a result of panic buying and the expansion of distribution channels.

The sale of Orion snacks in Korea, China and Vietnam surged 82 percent in March on the popularity of its new releases and pie snacks. Orion reported 208.3 billion won preliminary sales in and outside of Korea in March.

Nongshim and Samyang Food are projecting sales jumps in the first quarter on the increased overseas demand.

Nongshim’s first quarter operating profit is projected to come in at 50.1 billion won, up 58.4 percent on year, on 686.6 billion won sales, up 16.7 percent on year, according to a report from market tracker FnGuide. Sales of instant noodles account for the largest growth at 16.7 percent, followed by beverages at 17.5 percent, and snacks at 10.2 percent. Its overseas sales are projected to have jumped 24.2 percent on year in the first quarter, with a boost from the United States, China and Japan.

The popularity was triggered not just by panic buying overseas, but also by the "jjapaguri" buzz. Featured in Bong Joon-ho’s Oscar-winning feature “Parasite," jjapaguri is a mixture of two types of Nongshim instant noodles.

“It is expected to become difficult for liquor, instant noodles and confectionery markets, which face intense competition, to see dramatic changes [in rankings],” wrote analyst Shim Eun-joo from Hana Financial Investment in a report. “Companies that possess high recognition brands will be able to expand their market influence.”

“As more people buy food online, food manufacturers, like CJ CheilJedang and Pulmuone, are expected to strengthen their own online malls to provide food subscription services,” said analyst Kim Tae-heon from IBK Securities. “Selling on other platforms, like Market Kurly or Coupang, require the payment of commissions. By directly selling on their own websites, food manufacturers can offer cheaper prices and secure loyal customers.” 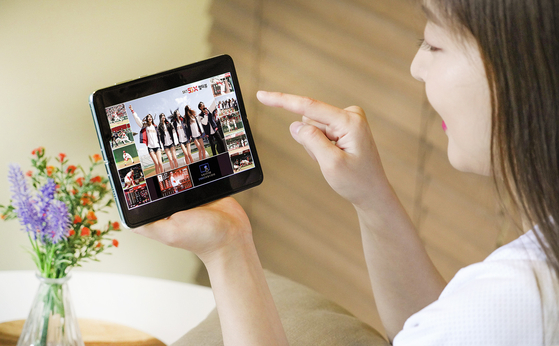 A model watches a baseball game through SK Telecom’s over-the-top service Wavve on May 1. The number of new Wavve subscribers from March 1 through April 23 was 510,000. [YONHAP]

Over-the-top (OTT) services have done well as people tried to entertain themselves at home. The number of subscribers to SK Telecom's Wavve, launched in September, hit nearly 1 million by April 23.

“Following coronavirus, views of virus-related content, like the movie ‘The Flu’ [2013], jumped,” said Kim Yong-jae, a spokesperson for Wavve. “In the initial phase of the virus outbreak, the number of subscribers jumped between late February and early March, but the growth stagnated as the pandemic prolonged.”

Payments to Netflix in March hit 36.2 billion won — the largest since it entered Korea in 2016 — according to analysis firms Wise App and Wise Retail. The total number of paid users as of March was 2.72 million, led by people in their 20s.

“We’re in the same uncertainty that everyone else is,” said Netflix CEO Reed Hastings in an online interview last month. “The thing we are certain of is the internet is growing. It’s a bigger part of people’s lives, thankfully. And people want entertainment. They want to be able to escape and connect, whether times are difficult or joyous. We’ve had an increase in subscribers in March that’s essentially a pull-forward of the rest of the year.”

LG U+, which exclusively offers Netflix content on its IPTV platform, said its viewership rate growth didn’t increase dramatically following the pandemic. But content under specific themes, like Bong Joon-ho films or films on virus-related topics, were popular, according to the mobile operator. KT and SK Telecom reported similar first-quarter IPTV service results.

The growing tendency to turn away from television also contributed to lagging viewing of IPTV content, according to Prof. Park Gi-su, who teaches cultural content at Hanyang University.

“People watch OTT via various devices, including cell phone, iPad or laptop, while IPTV needs to be watched on television. It’s been a while since people turned away from television.”

Despite the limited growth in content service as well as 5G subscribers, which the telecom companies have been pushing aggressively since last year, industry insiders argue the coronavirus is an opportunity for telecom firms.