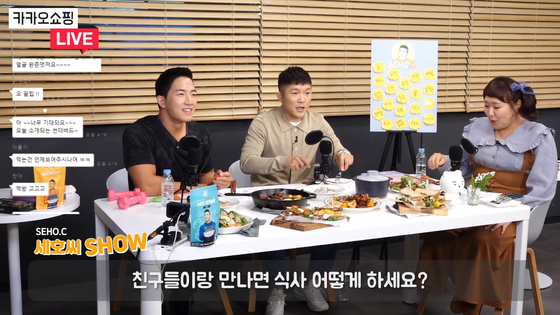 Live commerce presenters in a studio. The commercial was aired on Kakao Shopping Live, operated by Kakao Commerce, in November. [KAKAO]


Live commerce, the wacky but hugely successful format whereby customers are able to chat with an infomercial, has gone mainstream.


It’s only been around a year, and now the big players are jumping on the bandwagon.

Coupang began a trial service on Jan. 14, and KT released a live commerce feature on Seezn, an over-the-top (OTT) service, late last month. Baedal Minjok, a food delivery platform, is currently preparing to add a live commerce feature. Specific plans are still being devised, but it is hiring relevant workers, like merchandisers.

Live commerce is similar to television home shopping, in that show hosts sell products to viewers in real time. A major difference is that viewers can communicate with show hosts in real time in live commerce — asking questions directly and receiving answers immediately instead of having to call a customer center to ask for product information.

Entertainment is another popular feature of live commerce. For instance, viewers are asked to answer quizzes during the show. If they answer correctly, they receive a prize.

Inviting celebrities is another gimmick.

Live commerce has been around for several years. But its growth gained momentum last year as the number of online shoppers jumped from the increased time people spent at home to avoid contracting Covid-19.

Naver on Tuesday announced the number of views on Naver Shopping Live, a live commerce platform, has surpassed 100 million since the service was introduced in July last year. The total transactions on Shopping Live in December exceeded 20 billion won ($18.13 million). Kakao said last week the number of views of live commerce videos hit 20 million on Kakao Shopping Live, operated by Kakao Commerce, since the service was initiated in May last year.

“The live commerce market grew fast last year as demand and supply for online shopping jumped from the virus,” said Yoo Ji-min, a spokesperson for Naver. “Entry barriers for small business operators to sell on television home shopping is high. Not to mention the high commission fee, sellers have to be prepared with a large inventory when selling on television home shopping, where mass sales occur.”

She added that live commerce has lowered the entry barrier for sellers, raising the number of suppliers and product categories online. That, along with growth of online shopping, has resulted in the overall growth of the live commerce market.

Online sales as a percentage of total for Eland Retail doubled in 2020 compared to the previous year, but Eland says there is more to live commerce than just increased revenue.

“Through live commerce, we can collect customer data, like to which remarks made by show hosts customers respond to and which types of products are sold well at which time period,” said Park Dan-bi, a spokesperson for Eland.

A live commerce video filmed at a studio. It was aired on Kakao Shopping Live, operated by Kakao Commerce, in November. [KAKAO]