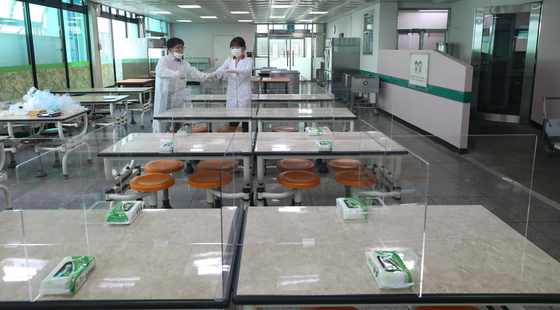 Teachers set up dividers on lunch tables at a high school in western Seoul on Monday, as they prepare for the first day of classes next week. [NEWS1]


High school seniors go back to school next week, the beginning of the end of coronavirus school closures.

Classes will begin for students in the 12th grade starting May 13, as most are due to take college entrance exams this fall, said Education Minister Yoo Eun-hae at a press briefing Monday.

Students in lower grades will be returning to school in three separate waves starting with 11th, ninth, first and second graders on May 20; 10th, eighth, third and fourth graders on May 27; and finally fifth, sixth and seventh graders on June 1.

Kindergartens will open on May 20.

The ending of school closures comes as the government wraps up its official social distancing campaign starting from today, which is Children’s Day in Korea.

The decision to resume classes on a staggered schedule was based on health recommendations that advised caution with regard to the spread of Covid-19, Yoo said. Students from Grades 1 to 2 were prioritized because parents have a harder time taking care of them than older kids.

The school year was originally set to begin on March 2, but the virus forced the government to delay school openings for a total of 79 days.

How classes are to be taught in these first days will be left up to each school, Yoo said, and they will have the option to operate morning and afternoon classes separately or adjust class hours to allow social distancing.

“At our schools, we must adopt a new lifestyle in line with [social distancing rules],” Yoo said. “Our schools cannot return to the state before Covid-19, and so all us educators must be prepared to operate schools in new ways.”

The minister urged students to abide by social distancing rules at school and wear face masks at all times in and out of classrooms. The government will also require schools to stagger lunch times so that large groups of students are not crowded together.

The resumption of classes comes as virus infections in the country continue to taper off. On Monday, health authorities reported eight new infections, all of which came from abroad. For the second time in over three months, not a single domestic infection was found. 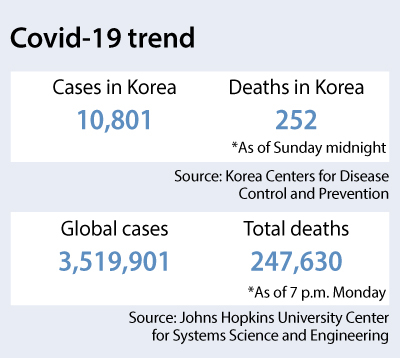 This put the total number of infections in the country at 10,801. Two additional fatalities were reported, setting the total at 252.

While the situation looks positive, Korean health officials said they will not be taking any chances.

Vice Health Minister Kim Gang-lip on Monday announced the country would establish a system of respiratory clinics nationwide to prepare for a possible second wave of infections in the future.

According to Kim, around 500 will be set up by provincial governments at local public health centers with the participation of local doctors, and 500 more will be added in the near future if conditions allow.

Larger variants of these clinics will be set up at private medical facilities with infrastructure used for quarantine purposes.

“The plan is to make [these clinics] a model of public-private cooperation,” Kim said at a press conference at the Central Government Complex in central Seoul. “A detailed plan and guidelines will be created in early May in coordination with medical professionals.”

The plan represents a major step by Korean health authorities to stay ahead of the curve in controlling the coronavirus outbreak in the country.

Setting up separate clinics solely for the treatment of respiratory illnesses like Covid-19 could help alleviate concerns of overloading at regular hospitals, a scenario that debilitated the health systems in countries like Italy, Spain and, more recently, Japan.

Health authorities in Korea also said they would step up financial support for private medical facilities and pharmacies nationwide, as many such businesses have seen decreasing patient numbers amid the outbreak.

As an initial step, Kim said the government would extend its current policy of reimbursing such facilities with health insurance payouts for another month until June. Under the policy, medical facilities each month receive around 90 to 100 percent of what they were reimbursed in the same month last year, meaning any shortfalls this year are taken up by the government.