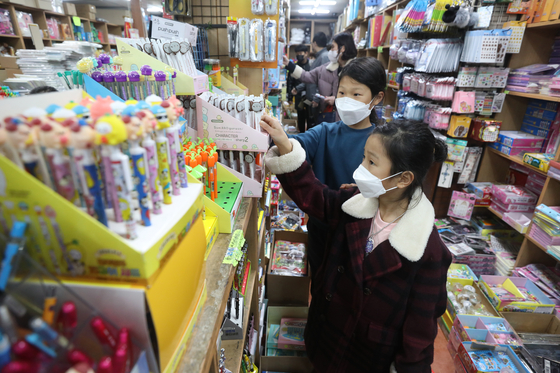 Students pick out school supplies a day ahead the new semester at a stationary store in Jongno District, central Seoul, on Monday. Under eased regulations, kindergarteners, first and second graders and high school seniors can go to school daily starting Tuesday. [NEWS1]


Younger students and high school seniors will be able to go to class in person every day with the start of the new school year Tuesday, while health authorities Monday warned that lax social distancing measures on campuses could lead to a rise in infections.

The Ministry of Education expanded in-person classes in the new semester, and kindergartners and first and second graders in elementary school are expected to be able to go to classes every day, along with college-bound high school seniors — contingent on the government’s five-tier social distancing restrictions staying at Level 2 or lower.

Other grades can operate at two-thirds capacity or one-third capacity depending on the social distancing level and school guidelines.

The government extended the current social distancing scheme from Monday for another two weeks through March 14 as cases remained in the 300s and 400s in the past week.

The greater Seoul area remains subject to Level 2 regulations, the third highest level in a five-tier system, while the rest of the country has been at Level 1.5.

Jeong Eun-kyeong, the commissioner of the Korea Disease Control and Prevention Agency (KDCA), said in a briefing Monday, “Recently, face-to-face contact has increased amid relaxed social distancing regulations, and there is a risk of clusters of infections with the start of the new semester in March.”

She noted that face-to-face contact will inevitably increase once the new school year starts and that college students likewise will be exposed to more risk of infection with gatherings, orientation events and moving into dorms.

Jeong added that quarantine and education officials will monitor public facilities and dormitories within schools to prevent infections, urging schools to enforce mandatory mask-wearing on campuses and abide by the government ban against gatherings of five or more.

Last year, the start of the new school year was pushed back over a month to April because of the coronavirus pandemic and unprecedentedly kicked off through remote lessons.

The Education Ministry made the decision to expand physical classes this year after determining that younger students are better off with in-person learning and addressing the growing demand for child care for working parents and studies that showed a low rate of coronavirus transmissions in children under 10 years old.

The Education Ministry and local education offices are dispatching an additional 56,000 personnel to cope with the expanded classes while safely following disease control regulations.

The Education Ministry, Public Administration Ministry, Gender Equality and Family Ministry and other related agencies, police and local governments will conduct a joint inspection of areas around 6,472 elementary schools nationwide until March 19 to crack down on any hazards to children’s safety.

Korea reported 355 new Covid-19 patients, of which 338 were local infections, raising the total cases to 90,029 as of midnight Sunday, according to the KDCA Monday. 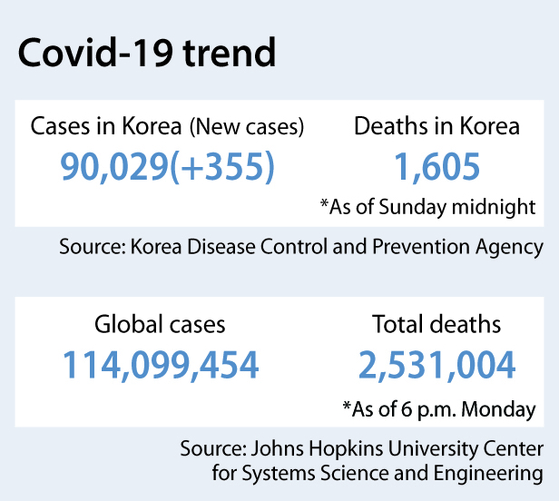 This was a slight drop from 415 on Friday and 356 on Saturday, as the country continues to see infections linked to industrial sites, fitness centers, nursing homes, day care centers and private gatherings.

There were two more fatalities, raising the total death toll to 1,605.

Korea began its nationwide Covid-19 vaccination program Friday, beginning the inoculations of AstraZeneca patients and health workers under 65 at nursing homes, convalescent hospitals and other high-risk facilities. On Saturday, the first Pfizer shots were given to frontline medical workers treating Covid-19 patients.

The KDCA said there were 40 more reported cases of milder adverse reactions to the vaccine reported as of Sunday midnight.

This brings the total to 152 people who have reported mild reactions, such as headache, fever, nausea or vomiting, which are common after vaccinations. One case was from the Pfizer vaccine and the rest after the AstraZeneca shot. There have not been any reported cases so far of any serious adverse reactions such as anaphylaxis, or a severe allergic reaction.

Korea reported 17 imported cases, including three from Pakistan and two from Indonesia, Japan, the United States and Morocco.

The KDCA said Monday that there were 14 additional variant cases from overseas, of which 11 were of the British strain and three South African. They were all imported cases, two detected upon entry and the rest during self-isolation.

Korea has a total of 156 reported variant cases — 133 of the British variant, 17 of the South African and six of the Brazilian.

Of new local infections, 92 were reported in Seoul, 156 in Gyeonggi and 14 in Incheon, said the KDCA.

Outside the metropolitan area, 16 were reported in Busan and 10 each in Daegu, North Gyeongsang and North Jeolla.

Credit limits for online classes are now up to the universities