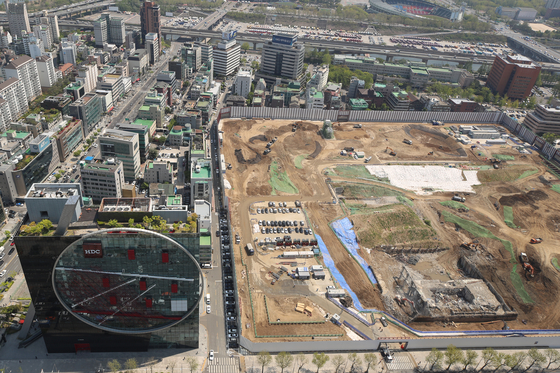 A view of the plot of land in Samseong-dong, southern Seoul, bought by Hyundai Motor Group in 2014. The group is planning to start construction of the Global Business Center soon and complete the project by 2026. [YONHAP]

Hyundai Motor Group is finally getting down to work on its Global Business Center (GBC), a long-delayed Gangnam megaproject that will sit atop a 10 trillion won ($8.2 billion) plot of land.

The automaking group said Tuesday that it filed a request with the Seoul Metropolitan Government earlier this month to commence construction. The city government is preparing to green light the tower and complex as early as Wednesday.

In September 2014, Hyundai Motor Group spent 10.55 trillion won to buy the 79,342-square-meter (854,030-square-foot) plot in Samseong-dong, southern Seoul. It was the site of a Korea Electric Power Corporation headquarters.

The GBC is expected to be 569 meters (1,867 feet) in height, with 105 floors above ground and seven basement floors. It will be the tallest building in Korea — taller than Lotte World Tower, which stands at 555 meters.

The basement level will be built by the Seoul Metropolitan Government, while Hyundai Engineering & Construction will build the rest of it. Other companies will be invited to invest in the project.

The Seoul city government said it will form up a special entity for the project and spend 1.75 trillion won to do so. The basement level will connect to nearby underground infrastructure.

Hyundai Motor Group is preparing to use the top two floors as observatories and include auditoriums, condominiums, shops and tourist attractions in the building. The GBC will serve as the new headquarters for 15 Hyundai Motor Group affiliates and be a workplace for around 10,000 employees.

The plan was originally opposed by the Ministry of National Defense due to concerns over the structure obstructing the path of fighter jets bound for combat, but Hyundai Motor Group resolved the issue by agreeing to pay for radars to be installed at the site.

The coronavirus outbreak could also delay the completion of the project as business has slowed and group factories have been shut.