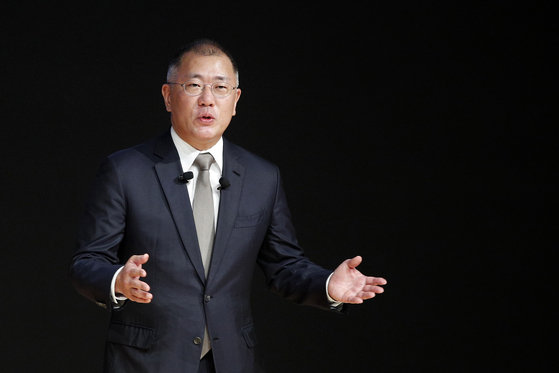 Euisun Chung was named chairman of the Hyundai Motor Group, the first time in 20 years that Korea’s largest automotive company got a new chairman.

He is the third member of his family to lead the group following his father Chung Mong-koo and grandfather Chung Ju-yung, who founded the company in 1967.

Chung was appointed by the board of directors after a meeting on Wednesday.

In remarks after his appointment, Chung said the company's focus for the future is "safe and free movement” for people and a "higher plane" of living.


"For the free movement and prosperity of humanity, we will develop the world's most innovative and reliable autonomous driving technology, offering entirely new mobility experiences,” he said.

For the past few years, Chung has been spearheading the group’s transformation from an automaker into a “future mobility solution provider,” exploring fields like hydrogen fuel cells, robotics and urban air transportation — or flying cars.


"Our world-class hydrogen fuel cell technology will be used not only in automobiles, but also in various fields as an eco-friendly energy solution for the future of humanity," said Chung Wednesday.


"We will also realize the future of our imagination through robotics, Urban Air Mobility [UAM], smart city and other innovations. These groundbreaking advancements will offer a higher plane of life experience for humanity."


As executive vice president over the past two years, Chung has rolled out eco-friendly cars and expanded partnerships with younger mobility companies including Aptiv, an auto parts maker specializing in self-driving vehicles based in Ireland, and Grab, Asia’s largest car-sharing platform.

Performance-wise, a turnaround of Kia Motors’ business as the brand's president from 2005 to 2009 tenure and the successful launch of the luxury brand Genesis are achievements credited to Chung.

After joining the company in 1999, Chung was promoted from vice chairman to executive vice chairman, a post that was created for him in September 2018.


Since then, there have been numerous rumors that Chung would officially take over his father’s position as chairman. Last March, the 49-year-old was approved by Hyundai Motor’s board of directors to serve as the board’s chairman, expanding his managerial power at an auto company that oversees 12 listed subsidiaries.


According to Hyundai, it was his father that suggested it was time for a younger leader to take over the group.

The elder Chung was formally inaugurated as honorary chairman on Wednesday. In July, Chung was hospitalized due to an intenstinal infection, and is still receiving medical care.

Chung Mong-koo is generally recognized as the force that raised Hyundai’s status as a global carmaker. He became chairman in 2000 when Hyundai was still battling a negative image associated with Korean cars, and seven years later the company joined the ranks of the top global five automakers by sales.

Chung was inducted into the Automotive Hall of Fame in 2020.

A remaining task in the succession process involves shareholdings. Apart from Hyundai Glovis, Chung owns less than 3 percent stakes in each of the group’s core affiliates: Hyundai Motor, Mobis and Kia Motors.

Hyundai Motor Group had pushed a restructuring in 2018 to untangle a complicated cross-shareholding structure which, as a result, would have strengthened the new chairman’s stake across Hyundai affiliates. The plan was abandoned after opposition from investors including the activist fund, Elliott Management.

In a Wednesday report, Kang Seong-jin, a KB Securities analyst, wrote that governance reform under the younger Chung is expected to be “market-friendlier” than the previous attempt.


“In the past two years, Chung has showed efforts to win over investors’ support in the decisions he made — new auto releases, partnerships, vision on future mobility and shareholder return policies,” wrote Kang. “Even if a second Elliott comes along to threaten management, the possibility seems low that normal shareholders will want to scrap Hyundai’s leadership.”