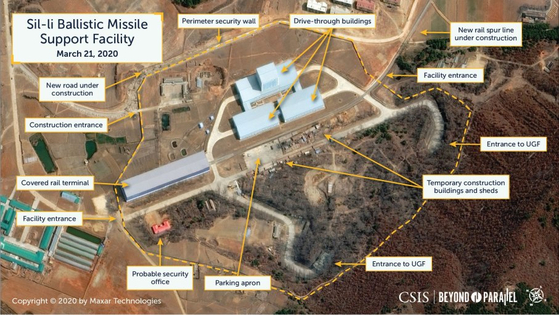 A satellite image of North Korea’s ballistic missile support facility at Sil-li published in a report from the analysis website Beyond Parallel Tuesday. [CENTER FOR STRATEGIC AND INTERNATIONAL STUDIES]

Beyond Parallel, a North Korea analysis website run by the Washington-based Center for Strategic and International Studies (CSIS), said in a report accompanied by satellite imagery released Tuesday that the facility was in Sil-li, 17 kilometers (10.6 miles) from Pyongyang, nearly adjacent to Pyongyang Sunan International Airport.

The unique characteristics of the facility, such as its layout, configuration and 442,300-square-meter (4,760,878-square-foot) size, suggest it may be used to assemble ballistic missile components manufactured in nearby factories, the report read.

The report noted that three interconnected drive-through buildings at the complex, on which construction began around June 2017, and a well-connected underground facility were large enough to accommodate “all known North Korean ballistic missiles and their associated TELs, MELs or TEs,” referring to launching systems used to fire the projectiles.

The central section of the complex has a bay elevated by around 30 meters (98 feet), which is high enough to house a Hwasong-14 or -15 ICBM standing in a firing position, the report said.

A security wall around the facility’s perimeter also showed the complex was not yet complete, the report said, but “barring unforeseen delays, it could be complete and ready for operations sometime during late-2020 or early-2021."

The Beyond Parallel report was authored by Joseph Bermudez, an analyst at CSIS and North Korea expert who previously wrote reports on a variety of satellite image analyses of North Korean ballistic missile infrastructure.

In 2018, amid nuclear negotiations between Pyongyang and Washington, the think tank identified at least 13 undeclared missile bases in the North that suggested the regime was engaging in deceptive practices to augment its nuclear and missile program in spite of a pledge to denuclearize.

A South Korean military official said the complex at Sil-li “appeared to be a facility that shows how North Korea plans to continue operating its ICBM program following its test launches” in 2017. Seoul was analyzing the facility as its “significance appears different from [the regime’s] advancements in conventional weapons,” the official said.

The nearby airfield at Sunan, which houses the North’s largest international airport, has been used as a missile testing site in the past, where the regime test launched intermediate-range ballistic missiles — the Hwasong-12 — in August and September 2017.

The site is also well situated to receive transfers by rail from factories known to manufacture missile components, like the Tae-sung Machine Factory or the March 16 Factory in Pyongsong.

North Korea is believed to have successfully developed at least three ICBMs — the Hwasong-13, -14 and -15. The largest and most threatening weapon, the Hwasong-15, is theoretically capable of reaching the entire U.S. mainland with an estimated operational range of 13,000 kilometers.

“Support facilities are crucial in order to operate an ICBM arsenal,” said Kwon Yong-soo, a former professor at the South’s Korea National Defense University and an expert on North Korea’s missile program.

“[The North] seems to have felt a strong necessity to arrange facilities for the maintenance, upkeep and repair of [its ICBMs] before they are made operational,“ he said.

North's latest ICBM launch may be a Hwasong-15 in disguise