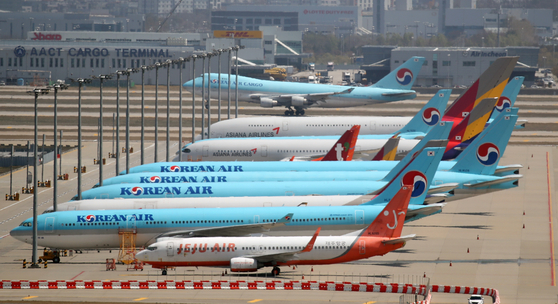 Starting on June 1, Korean Air Lines will operate 32 of its 110 international routes, including Hanoi in Vietnam, Singapore, Seattle and Bangkok. It will operate 146 flights weekly. Since the coronavirus outbreak, Korean Air Lines has only run 13 international routes, including Los Angeles and New York, running 55 flights per week.

Before the outbreak, it had 900 flights per week.

The airline said it is preparing for a potential increase in travel demand when the coronavirus recedes worldwide. It also took into consideration a recent increase in cargo deliveries that included coronavirus test kits.

Korean Air Lines delivered a total of 91,080 tons of cargo in March, up 42 percent on year from 64,121 tons in March last year, according to data provided by Incheon International Airport Corporation.

It hopes to carry more cargo once the Ministry of Land, Infrastructure and Transport loosens a regulation that requires airlines to use fire-resistant packages when carrying cargo on passenger aircraft.

The ministry on Monday announced it was reviewing easing the regulation, as airlines maintain that fire-resistant packages are difficult to find.

The airline could add more routes in June once international restrictions are eased. Cities in China, which bans the entry of foreigners, could be added if Beijing relaxes the regulation, according to Jang Sun-wook, a spokesperson for Korean Air Lines.

“The social distancing campaign was eased in May, and we can’t predict how things will change in June,” said Jang. "We are making a preparation for that change."

On May 1, Asiana Airlines resumed its routes to San Francisco and Narita, Japan. It hasn’t yet come up with plans for June.

Asiana halted flights to San Francisco after it was banned from operating the route for 45 days in March and April for causing an accident during landing in 2013. The accident killed three people and injured more than 100 people.

Despite the resumption of flights, it's very unclear how many people will be on them.

“Traveling these days takes at least four weeks of being quarantined — two weeks in the country one travels to and two weeks in Korea when they return,” said Lee Jung-pil, who merchandises travel packages at CJ ENM’s home shopping division, CJ O Shopping.

“Most people, especially office workers, don’t have that much time to spend for holidays.”

“Airlines are resuming flights even if the operations cause deficits because they need cash,” said Prof. Hur Hee-young, who teaches business at Korea Aerospace University. “By earning cash, airlines can maintain employment. Also, aircraft need to be operated regularly for them to function properly.”