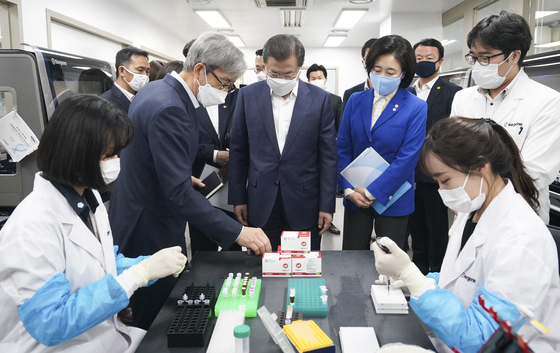 The country exported $201.23 million worth of diagnostic kits for the novel coronavirus to 103 countries last month, compared with $24.1 million posted in March, according to Korea Customs Service data.

Local medical device manufacturers were early getting into the race to develop Covid-19 test kits, particularly as Korea emerged as one of the first countries with a large outbreak. Test kit exports jumped from $3,400 to one country in January to $642,500 to 33 countries in February. By March, they were being exported to 81 countries.


According to the Johns Hopkins University as of Thursday afternoon, Brazil reported the ninth highest number of confirmed Covid-19 cases in the world at 126,611, along with 8,588 deaths from the coronavirus. The world as a whole reported a total of 3.76 million confirmed cases and 263,841 deaths.


Diagnostic kits from Korea have been in high demand and have stayed at the center of attention after local manufacturers like Seegene, SolGent and SD Biosensor released highly accurate testing solutions weeks before other manufacturers.


The Korea Customs Service said it will focus all its efforts to ensure local companies can export more volume of their testing kits to countries in need. The agency said it will operate a 24-hour customs system for testing kit components to be imported quickly while minimizing the evaluation and regulatory procedures.


In April, Korea's overall exports amounted to $36.9 billion worth of products, down 24.3 percent from $48.8 billion a year earlier.

No more swabs up the nose if alternative tests approved