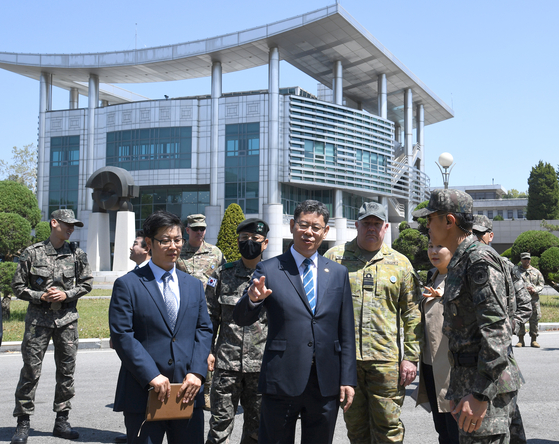 Unification Minister Kim Yeon-chul inspects tourism routes at the truce village of Panmunjom in Paju, Gyeonggi, during a visit to the demilitarized zone on Wednesday. [YONHAP]


South Korea will resume tours to the demilitarized zone (DMZ) that were frozen due to the coronavirus, starting with trips to the truce village of Panmunjom next month, announced Minister of Unification Kim Yeon-chul on Thursday.

Panmunjom, the site of the signing of the armistice agreement to end the 1950-53 Korean War, will likely be opened to a small number of tourists from June, Kim said at a press conference in central Seoul.

The tours to Panmunjom and nearby landmarks in the western section of the DMZ had been suspended since October last year due to the spread of African swine fever among wild pigs in border areas. The coronavirus outbreak further halted any tourism in the area this year.

The African swine fever epidemic has since been controlled in the western parts of the DMZ, but remains a cause for concern in the more mountainous eastern sections.

Kim visited the DMZ Wednesday and inspected tour sites in the area just days after the two Koreas exchanged gunfire at the border on Sunday. Kim said Thursday the incident did not reflect any danger to tourists going to Panmunjom, as the incident took place in a central section of the DMZ at Cheorwon, Gangwon.

North Korea is unlikely to raise tensions at Panmunjom, which was also the site of the first inter-Korean summit in 2018, as the truce village is traditionally an important tourism resource for Pyongyang as well, Kim said.

As to the icy state of inter-Korean relations presently, Kim underscored South Korean President Moon Jae-in’s call for a more active stance toward cooperative projects in spite of enduring tensions on the peninsula.

But on whether Seoul had plans to enter discussions with Pyongyang anytime soon, Kim said the government “needed more time,” adding that “in the end, cooperation is something that has limits in terms of what we can unilaterally pursue.”

The North is likely to reciprocate on inter-Korean cooperation once the Covid-19 pandemic settles down and its interest shifts back to economic matters, Kim said.

“The Covid-19 situation affects not only our daily lives but also inter-Korean relations, and the political situation on the Korean Peninsula,” Kim said. “It is the Unification Ministry’s challenge to deal with such nontraditional security threats, and [the two Koreas] will need to exchange information and cooperate in terms of technology and mutual quarantine efforts.”

One possibility that Kim noted was within the range of possible measures Seoul could take to ramp up relations is providing medical assistance to the North. With regards to humanitarian aid in the fields of medicine and health, international sanctions on the North will not pose a problem, Kim said, adding Seoul was considering conducting joint medical research with North Korea.

The minister went on to address the recent media clamor surrounding the health of North Korean leader Kim Jong-un, who reemerged in public earlier this month after almost three weeks out of the public eye.

Kim Yeon-chul and the South Korean government at large were quick to dispel the rumors when they first emerged after consulting with Seoul’s advanced intelligence network on the North, which turned out to the correct assessment.

“When we assess intelligence, we must take into account how such information can affect the political situation and the economy,” Kim said. “The government’s intelligence capacity is generally geared to make conservative and strict conclusions on all such matters.”