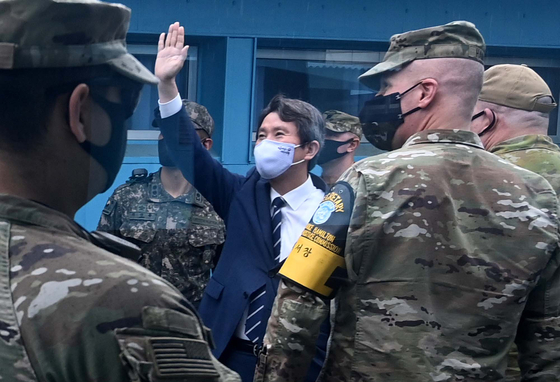 Minister of Unification Lee In-young, center, waves during a visit to the truce village of Panmunjom in the demilitarized zone in September. Tours to the area will resume in November, the ministry announced Monday. [YONHAP]


Tours to the demilitarized zone (DMZ) suspended due to Covid-19 and African swine fever outbreaks will resume next month, said South Korea’s Ministry of Unification on Monday.

Visitors who apply online through the Unification Ministry’s DMZ tour page will be able to tour the truce village of Panmunjom in the Joint Security Area (JCS) starting Nov. 4.

The resuming of the tours comes over a year after tours were suspended in June 2019 due to an African swine fever outbreak on the inter-Korean border.

According to the ministry, the areas around Panmunjom in Paju, Gyeonggi, have had no recent cases of the disease. Areas still affected by the virus, which may be lethal to pigs, in Hwacheon, Gangwon, are far away.

The ministry said the tours will start with only half the usual admittance rate and gradually allow more people.

“We hope the resumption of tours to Panmunjom can serve as groundwork for free movement and demilitarization of the area in line with the Panmunjom Declaration and [inter-Korean] military agreement,” said Unification Ministry spokesman Yoh Sang-key.

“Starting with Panmunjom, the government will continue efforts to return other areas in the demilitarized zone such as the DMZ peace trails back to the people.”

The two Koreas signed a military agreement in September 2018, during their third summit that year, to demilitarize the JSA and allow for free movement of tourists and personnel in the area.

Both sides made initial progress in seeing through the plan, with the withdrawal of some armed personnel in the JSA, but a subsequent chilling of inter-Korean ties has kept tensions high in the area.

Yoh acknowledged that Seoul has been unable to reach the North to discuss the DMZ tourism plan, though he said talks were continuing between the South Korean government and the United Nations Command, which oversees the area.

With regards to safety risks for the resumed tours — which come just weeks after a South Korean fisheries official was shot and killed by a North Korean maritime patrol in the North’s waters — Yoh said both Koreas’ troops in Panmunjom were unarmed and therefore pose no danger to the safety of visitors.

Applications for tours must be submitted at least two weeks ahead of the planned date of visit, with persons over the age of eight being eligible. Visitors will be allowed to apply for the tours on an individual or family basis, as opposed to the past, when visitors had to join parties consisting of 30 to 40 people.